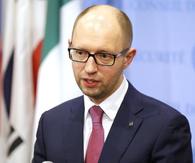 Ukraine's Prime Minister
Ukriane's prime minister, Arseniy Yetsanyuk has admitted Ukraine's failure to secure the eastern part of the country and the result has been fears of civil war. Last week, Yetsanyuk assured the world that Ukraine's security was combat alert in readiness for Russians forces at the border if they cross into Ukraine. But events in the east of the country over the weekends suggest that pro-Russian protesters have overwhelmed Ukraine's security forces; freeing detained people and bolstering pro-Russian agitation.
"I will be frank. Today, security forces are unable to take the situation in the Donetsk and Luhansk regions quickly under control," Yetsanyuk said at the weekend.
Yetsanyuk has said that Ukraine will not use the military to quell the unrest in the east of the country amid fears that the situation may lead to a civil war.
NEWS AND FEATURES
News & Features Around The World