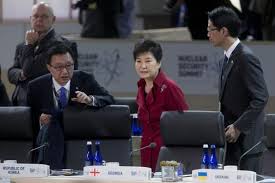 President Park Kye in the middle
President Park Geun Hye of South Korea was impeached on Friday by the country's parliament in overwhelming vote for her removal. With the impeachment, her power as president has been suspended.
However, she may not immediately disappear from Koreans' public until the country's Constitutional Court upholds her impeachment with a vote of at least 6 out of the nine judges in the court.
The Constitutional Court has six months to deliberate and rule on her case. There is a debate over whether the Constitutional Court will be able to muster six numbers of the judges to throw her out of office, because according to the New York Times, she was the one who appointed six of the nine judges.
But considering the grevousness of the charges of corruption against her and the public outcry along the voting of about 60 of her party members in the parliament in favor of her impeachment, she is consdered highly vulnerable to fall. But her lawyers will argue that charges of corruption against her by the opposition parties that tabled the motion for her impeachment be proven for her to be shown the way out by the court.
Geon Kye has no shown any desire to resign, but to fight her impeachment in the Constitutional Court. This is in spite of the celebrations in the court premises by protesters following the announcement of her impeachment. “I am gravely accepting the voices of the people and the National Assembly, and I sincerely hope that the confusion will come to a satisfactory end,” she said at the presidential Blue House in a meeting broadcast on national television."
The ew York Times reported that she apologized for her indiscretion and carelessness in office, and that it her fourth apology in public in public seven weeks, but failed to accept that she wascriminally liable. The daughter of a former popular leader and who rose into political limelight on her father's fame, is accused of corruption and extensive violation of the constitution.
NEWS AND FEATURES
News & Features Around The World