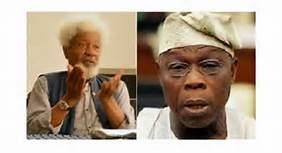 Soyinka & Obasanjo
There is a common saying among Nigerians that when two children are cutting a tree in the bush, it is the elders who could tell the direction the tree will fall. But when two elders are cutting a tree in the bush, who could tell the direction the tree will fall, with the elders whose responsibility it is to watch and tell, where such a tree will fall are themselves busy cutting a tree?
This is the question some Nigerians are asking over the quarrel between Professor Wole Soyinka and former President Olusegun Obasanjo about a paragraph in a new book "My Watch" by Obasanjo, and which Soyinka has described as unpleasant and odious.
Consequently, Soyinka has called Obasanjo a compulsive liar, coming like a drown against the retired army General and former president, who has been having a free battle against the country's incumbent President Goodluck Jonathan, over the issues of corruption, and what he called the president's inability to lead.
Seemingly to avoid a victory for the incumbent president as a result of his own battle against Obasanjo, Soyinka has equalled the former president's stance of accepting a large amount of donation for a library to that of the incumbent president's acceptance of about N21 billion donation toward the forthcoming presidential election, like using one stone to strike two birds,  but favoring the opposition party.
Both Obasanjo and Soyinka are on the side of the opposition against the incumbent president. The current split and vitriolic between the two men is certain to make many Nigerians think that Obasanjo, who has been rubbishing the president and the ruling party is a compulsive liar, and that all he has been saying about the president and his party are lies.
Obasanjo is yet to respond to Soyinka's reaction to part of the content of his book. Already, the book is a subject of litigation by another aggrieved Nigerians, who Obasanjo says is corrupt and not fit to be leader of his party in his state of the country.
Happily for the guy who has gone to court over the book's publication, Soyinka's description of Obasanjo as a man who delights in pulling others down to gain attention or serve his ego has buttressed the guy's position.
Another minus in the development for the former president is that the court has asked him to explain why he shouldn't be punished for contempt, having gone ahead to publish and distribute the book against the court's order.