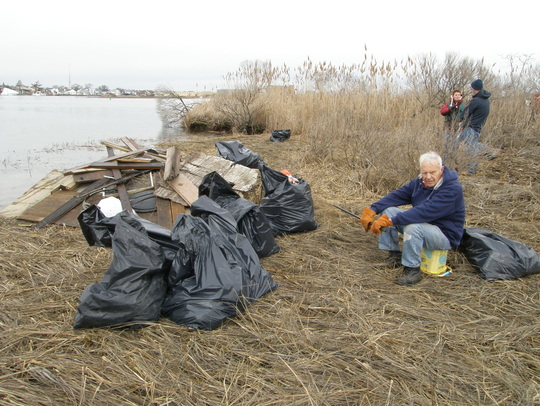 Charlie Fisenne sitting near some debris
On Saturday 16 March 2013, more than 200 volunteers picked debris  from a wetland between Freeport and Merrick, Long Island, New York, under Splash.
Among the volunteers was an 85 years old Charlie Fisenne of Baldwin who said he had been part of the cleaning exercise for 12 years after his retirement. "Every religion says cleanliness is next to Godliness. I try to do my little bit after retirement. Joining others to clean the environment is like donating blood for humanity." he said.
Fisenne was not the only participant who attracted the reporter's curiosity. There were some young women from H.F. Carey High School, Franklin Square, Long Island. "We belong to Go Green Club in school. Awareness about the harbor cleaning with Splash was possible through Dr. Maser, chair person of the Science Department." Vivian Petillo said. According to Petillo, members of Go Green Club are elated at giving back to society through environmental cleaning efforts. "We pick debris around the school neighborhood every week. We also have a plan to get solar panels on top of the school's score board and the snack shack."
Fisenne, students from H.F. Carey High School, SUNY at Westbury and Hofstra University were part of the volunteers who rowed in boats across the expanse of water from Nautical Mile in Freeport village to Swan-a wetland between Freeport and Merrick- a journey of about ten minutes on speed boat. Before taking off from Nautical Miles in Freeport, volunteers who had arrived early before 0900 hrs were registered and issued passes by the organizers,strictly ensuring participants wore rubber boots, hand gloves and garbage bags issued out. After the registration, participants moved into the harbor where they were given life jackets. It was time to step into waiting boats.
As volunteers took their positions in the boats, a man was noticed wearing snickers, and he was asked for his rubber boots. He said he thought snickers could be all right. However he said he had been approved he could go on his snickers by the organizers. But another man says he would need to dip feet in hot water when he gets home, because it is really cold outside in the marsh. The frigid cold condition on the water as the boats sped through the expanse was first sign of the cold awaited the volunteers.
On arrival at Swan, the men and women went into action, the cold weather was no longer an issue, but the amount of debris that littered the ground to be picked up. They were of different sizes and shapes: Empty bottles, woods, household utensils and garbage. Within hours of the operation, the land looked like a green meadow; noticed and discussed by journalists who witnessed the cleaning, what they saw on arrival and what they were leaving behind . Participants were delighted for seeing the immediate effect of their efforts at keeping the environment clean.
Journalists were told that the debris that littered the ground on arrival were pushed there by waves from the water. And that the debris got into the water by waves that forced them from where they had been littered by humans. Hurricane Sandy's  devastation worsened the situation. The organizers spoke about the long time damage the debris that found their ways into the water had done to ecological life in Long Island. And since it is Splash's work as a non-profit to keep the harbors in that part of  New York clean, it organizes volunteers to remove the debris from the marshes around Long Island, and ensuring they don't find their ways back into the water.
"Splash does pick up debris around Long Island harbors everyday. Chris Taylor said. "But there had been no pick up since after Sandy's devastation because of a regulation that no one was allowed to do any cleaning in the harbors until after 16 March 2013,"  Taylor described the dangerous phenomenon of Sandy's devastation that had made the water unsafe for humans as toxic and dangerous, his face screwed up with unbelief.
Donna Shulman, teacher and resident of Hewlett said, "Sandy messes it up. It has never been like this before. It is always clean. It may not be pristine." Another teacher, Patricia Quinto confirms Shulman's statement," It has never been so bad until after Sandy. Splash comes out everyday.As an adult I feel it is my responsibility to join others to clean the water."
NEWS AND FEATURES
News & Features Around The World