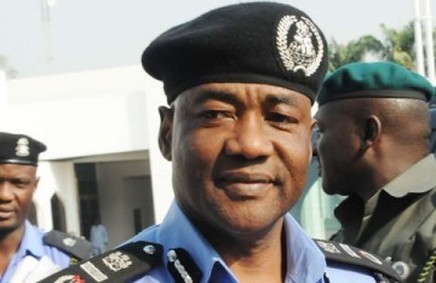 Nigeria's Inspector General of Police
Three employees of an hotel in Benin City, Edo State in Nigeria, are currently in police custody, running to 15 days over stolen phone card. The police says the card has been stolen from the owner during an armed robbery operation somewhere in Ogun State. The suspects in the case had spent seven days in police custody in Benin City, while the police awaited the complainant who was robbed to come forward. And because the complainant failed to turn up in Benin City against police expectation after seven days, the police transferred the suspects to Shagamu and after four days in Shagamu, the police had transferred them from Shagamu to Abeokuta last Friday.
"This is a capital offense and not a minor case." AC Lanre Bankole, area commander at Shagamu police station said. He added that the police has authority to detain suspects in capital offenses up to three months during investigation, before deciding either to take the suspects to court or free them.
One of the suspects, Christian Musa, who had the card on his phone and through whose calls the police traced and arrested him said in his statement to the police in Benin City that a co-worker in the hotel gave him the call card. The police picked up the co-worker, whom Musa had  mentioned in his statement.
Musa's co-worker in his statement to the police in Benin city agreed that he was the person who gave Musa the card, because he thought and  believe it was a card Musa had announced lost. He said that since Musa did not reject or return the card, he believed it was his lost card.
The police wants to know who may have given him the guy who gives the card to Musa the card or where he may have found the card before he gave it to Musa.
Our source said said the guy said in his statement to the police in Benin City that he found the card on the floor. The officer in charge of police authorities in Shagamu told this reporter that the police is working to get to the root of how the guys got the card robbed from the owner at gun point. About when the matter will go to court, he said it is a capital offense and not a minor case in which the suspects could be rushed into bail in 24 0r 48 hours.
The officer maintains the fact that the police is doing its work in the interest of the public, because there is a complainant who has been robbed; and made to go through a hard situation. He said that the boy who said he picked the card on the floor and gave it to Musa and Musa are making conflicting statement. But Musa's relatives disagreed and said there has been no conflicting statement. They said Musa said a co-worker gave him the card, and that the co-worker had not denied the fact.
When the officer in Shagamu was told that the police in Benin City had reliably confirmed that Musa was on duty in the hotel in Beni City at the time of the robbery in which the card was stolen in Ogun State, he said there was nothing he could do, because he came to work and found the suspects had been transferred to Abeokuta.
Two of Musa's relatives confirmed they were in Abeokuta on Saturday and and they saw Musa at the police headquarters there. They are worried  that they have been running from Benin to Shagamu and to now Abeokuta, and they don't know where next they would be going. They say it makes following the case complicating for them. They said Musa's mother traveled from the village to Benin City. She was told her son had been moved to Shagamu and she headed to Lagos from where she hoped to be going to Shagmau to follow up development in the matter..
Now that the case has been moved to Abeokuta, the cost of traveling becomes another source of headache, added to a son in police custody.It costs less to travel to Shagamu than Abeokuta from Lagos. It is why Musa's relatives think that the police should either take the case to court or bail Musa, and let Musa Know when to appear in the station or in court.