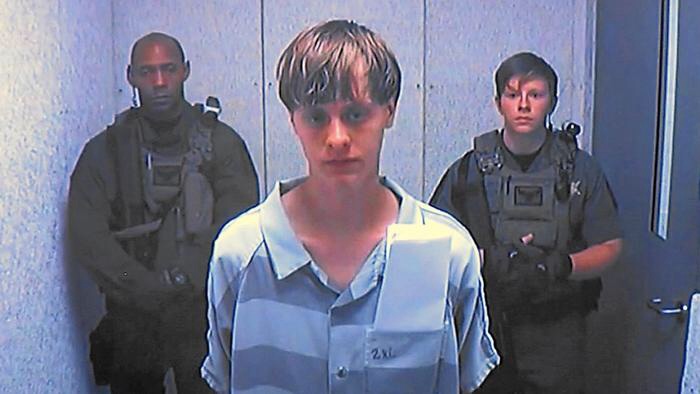 Dylan Storm Roof in jail (Courtesy: LosAngelesTimes)
Dylan Storm Roof has created what is more than a storm with the killing of 9 innocent parishioners during a Bible Study session at the Emmanuel African Methodist Episcopal Church in Charleston, South Carolina.
Dylan has raised the definition of a storm to to the roof, and his heinous act has become the talk of the town, for four days running.
Why wouldn't it be with the stealth manner he has entered the Church, sits next to the pastor, takes part in the scriptural study, disagrees with others and then pulls a gun, which he points first to a woman over eighty years, before he pulls the trigger and momentarily turns the nozzle towards others. At the last count, Storm has silenced the church pastor along with others in an act of another murder in the Cathedral.
Storm's act has been described as domestic terrorism and hate crime in news reports. What does Storms act reminds us apart from a past bomb attack also on  a Church in the same environ, where Storm has chosen to devastate humanity? It is T.S Elliot's 'Murder in the Cathedral' in which Thomas Becket was the victim of a King's wrath inside a Cathedral, over Becket's refusal to accede to the King's request to for him absolve bishops he had suspended from service.
In Elliot's 'Murder in the Cathedral', the knights who were Becket's assailants asked, "Where is the traitor?" and Becket answered, "I am not a traitor, but archbishop and priest of God; whom seek ye?"
Becket successfully turned the charge of a traitor against him back to his accusers, because he was pointedly asked. He disagreed with his accusers, said what he was and made his accusers the traitors who had entered the Cathedral for a heinous act. Unlike Elliot's Murder in the Cathedral', the parishioners in the Emmanuel African Methodist Episcopal Church in Charleston were not accused to be traitors by the traitor who entered the Church. He did not allow Pastor Clementa Pinckney the opportunity to defend himself and his parishioners.
But from the pronouncements of forgiveness by relatives of victims of Storm's killings in a court room, where Storm has been arraigned, the world sees the teachings of love and forgiveness which Pastor Pinckney has taught the parishioners as a proof of his priesthood, and that he has taught love and forgiveness following Christ's commands.
News reports had revealed how Storm had traveled a long distance to arrive at the the Church, which he may have chosen for yet undisclosed reasons for the execution of his madness and persecution of the Church. Some reports said that he was a loner and that he may have acted alone. The story of how he got his gun with money added for him by his parents, instead of outrightly getting him the gun to evade being labeled as accomplices in their son's act showed that home training or lack of it had played a role.
Observers are saying that the Storm's act is another one that resembles Adam Lanza's act at Bandy Hook Elementary School, Newtown, Conn. that left 27 dead, and 20 among them children; justifying President Barack Obama's words that these killings are becoming too many. Adam Lanza was 20, a year younger than Storm Roof, the traitor who entered the Church in Charleston.
NEWS AND FEATURES
News & Features Around The World