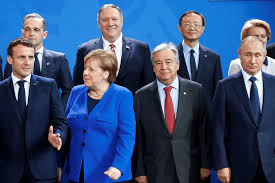 Al-Bashir behind the cage
Former President Al-Bashir of Sudan and his co-travellers in power are facing trial for a coup of 1989, a crime committed 31 years ago. Current power holders, like Bashir before them, are careless about the transiency of power.
No one who has experienced the comfort of being power and the exercise of power would wish to be in Bashir's shoes today. If Bashir had followed the rules during his time as a leader, he would not be behind bars as he is today. He has already been condemned for corruption, and he faces the possibility of death by firing squad.
The evil of running any country without a thought for the transiency of power is the room it creates towards entrenching vengeance in the public policy process, making  the care of the people a remote concern and the struggle for power and retribution take the front seat.
Awareness of the transiency of power is mouthed all the time by people out of power but hardly are people in power seen acting like people who are aware about the fact. Bashir came into office in 1989 and he acted like a drunk using power like he would never one day be out of power. He is now caught in the same cobwell he subjected the powerless.
Already, analysis from news reports have shown that Bashir may end up in the execution's chamber, despite his lawyer's call to the current Sudan government's abuse of the statute of limitation. Why would anyone care about the statute of limitation, when Bashir himself reliably committed worse crime against humanity and the reason he is wanted by the International Criminal Court, ICC, in the Hagues?
Rather than handover Bashir to the ICC for him to face  a normal process for his alleged acts against humanity, current power holders in Sudan are prolonging the days of justice and possibly helping Bashir to use the statute of limitation when he is eventually brought to the Hagues late in the day.
The fact is that Bashir may not make it to the Hagues, because his accusers in Sudan are ready to exact vengeance against him and his co-travelers in power for their own acts. Bashir and his co-travelers failed to give thought to the transiency of power. The same act being committed by current leaders in Sudan.
The same act has  been committed in many countries around the world. The act is committed almost every cycle of government between incumbents and the opposition. And no one seems to care about the ordinary people in the struggle for power and mindless retribution. It is possible that when people who are favorable to Bashir and his co-travelers also come to power, current power holders will be in trouble, if they fail to adhere to the rules.
Military is an aberration. Many African countries have experienced the aberration as a rule as a result of the alleged failing of civil authority. Many coup plotters are hailed as deliverers, and other as villains. In Ghana, ordinary people still consider Jerry Rawlings as a savior. Bashir may be facing the odds against him because of what he may have done with power against the rules in office.
There are others like Bashir who gain power either through coups or through the ballot boxes and they don't know why they are in power or what to do with power. bashir's experience and his likely fate should be a lesson for them.
HTML Comment Box is loading comments...
NEWS AND FEATURES
News & Features Around The World