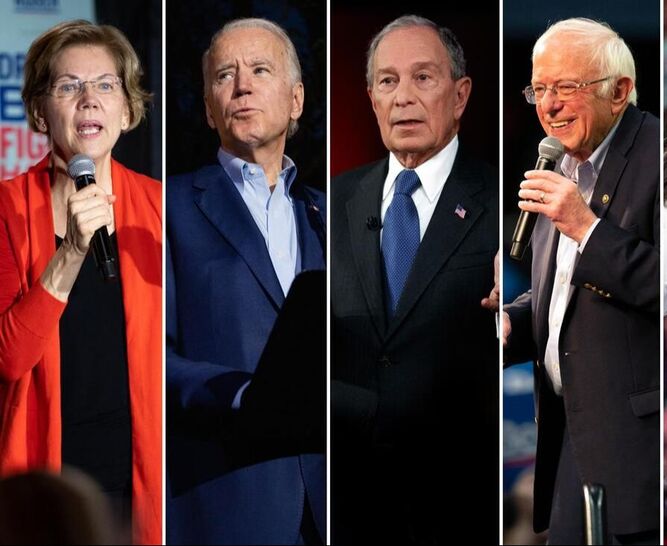 Elizabeth Warren, Joseph Biden, Mike Bloomberg and Bernie Sanders
Joseph Biden, Mike Bloomberg and Bernie Sanders all want to emerge as the Democratic Party's presidential candidate for the November 2020 election.
The party's hierarchy does not seem to want Sanders because of what is called his socialism agenda. The hierarchy is also believed  to have developed cold feet towards Biden and that it is thinking towards foisting Billionaire Bloomberg as the party's candidate.
Sanders has won three of the party's primary elections in Iowa, New Hampshire and Nevada. Biden has won only in South Carolina. Warren has won nothing. Bloomberg is appearing on the ballot for the first time for the Super Tuesday.
Bloomberg and his supporters are believed to be working to defeat both Sanders and Biden. Of course, it is what is expected to happen for him to emerge as a presidential candidate.Pete Buttigieg and Amy Klobuchar have dropped out to support Biden.
If Bloomberg doesn't win, he would still part with a billion dollar that he has promised  to give the party to aid whoever emerges as the party's candidate to fight the November election. So, if Bloomberg loses the campaign of Sanders or Biden, or whoever emerges as the party's candidate would expect a windfall from the billionaire whose ambition is firing him to put so much money away in quest of the office of the president.
About 11 states are voting on Super Tuesday in the Democratic primary election. The day is called Super Tuesday because it is the United States presidential primary season when the greatest day number of U.S. states hold primary elections and caucuses. The phrase has been used in reference to the presidential primary elections since about 1976.
The question on the lips of many observers is whether Sanders can crush the opposition against him in his own party. It is also believed that not many Americans are buying into his socialist programs. Though, he is believed to have a large following in his party. It is what has made today's Super Tuesday a make or break for Sanders and his supporters.
It is believed that Sanders is staging a fight against his party's hierarchy.and what the party stands for, and the hierarchy members  are saying against that they don't want socialism agenda as that would not assure their victory against President Donald Trump. However, some of the party's hierarchy are now saying that if Sanders wins they would come together and support him. And that they would come together and support whoever wins, including  Bloomberg who is fully in the party with his money as an instrument of his ability to turn the table in his own favor against Biden and Sanders.and the only candidate who doesn't have the type of problem that Biden and Sanders would give the party in an election fight against Trump.
Well, it is Super Tuesday for all Americans.Though the Democrats don't want observers to intervene to elaborate on the party's internal trouble leading to Super Tuesday and what may become the party after the Tuesday's primary election. And it does not matter if a billionaire is working to buy the party and buy the votes and that buying votes directly or indirectly is not part of the American political culture.
It is believed that with Buttigieg and Klobuchar out to support Bidens, Sanders and Bloomberg have lots of works to do. Sanders supporters are already talking about plans to edge out their man at all cost..Reports say things are looking brighter for Biden. And people are wondering why Warren has not dropped out to support Biden.
However, as people are asking why Warren is still in the race and not drop out to support Biden and make the November election between President Trump and Biden amid Burisma music, people are also wondering why the Democrats are so unlucky not to have a candidate capable of defeating Trump. People believe that Bloomberg has the money but does not have the charisma. Contextually, socialism is a problem: Burisma is a problem and the lack of charisma is a problem.
Comment Form is loading comments...
NEWS AND FEATURES
News & Features Around The World