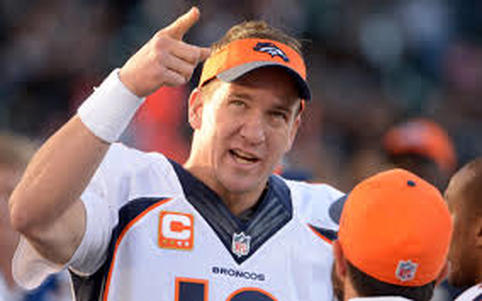 Peyton Manning of the Broncos
Have you been written off by observers, family members and friends,and you don't seem know what is happening to you about winning or losing the game of life? You have a reason to believe that with hard work, perseverance , learning, studying, sacrifice and love for what you are doing, you will be victorious at the end.
​   The Broncos proved it on Sunday in California with a victory in the Superbowl 50 against the highly rated Carolina Panthers.
There is nothing that drives home this philosophical assertion than a writing in the Facebook by Luzviminda Orjaliza Molina in which she wrote that success is no accident', following day after the Broncos' triumph. The broncos had been analysed to fail by virtually all analysts. But the Broncos  prevailed and won the Superbowl.
Just few hours before the game on Sunday, a reader of the National Football League website, had called the Global Pentorch's attention to the analysis on the website and the mouth watering analysis that gave the victory to Panthers ahead of the game. Understandably, polling has become part of the landscape, whether it is politics or entertainment. Speculation and prediction have become a great business, with people who believe that they are professionals working to tell the public what to expect as outcome of an engagement before the action begins.
There are times these speculations have come true and there other times that they have failed to hit the target. There is nothing wrong in giving speculations or predictions, but when such predictions or speculations are one sided and gives seems to favor one team without a thought that the other team can as well pull a surprise, creates an unbalanced and unfair scenario. Journalism allows speculations and predictions, but it frowns on unfairness and imbalanced reporting.
Serrano Joel, a New Yorker, who watched the Superbowl 50 said that the Broncos won the game the team had a good defense. When asked why the Panthers lost, he said because the Panthers played offensive. The question thus arises about why the analysts failed to acknowledge the fact  that either way, the offensive system or the defensive system of play may decide the game, and depending on which team has the luck on its side.
Panthers' known aggressive offensive play had convinced many observers that it would take out Peyton Manning out early in the game and wreck havoc for the Broncos, but that expectation failed. Instead, the Broncos succeeded at defending effectively and prevented the Panthers from breaking through to cause mayhem for it. In between effective defense and offensive, the Broncos still managed to create offensiveness against the Panthers, despite its aggressive defensive play.
Observers believe that the Broncos game play must have been as a result of hard work, learning and studying and a decision to persevere in the field of play no matter what lies ahead. It was not the Broncos first time in the Superbowl. The team was in the Superbowl in 2014, but it lost to the Seahawks. Therefore, Its emergence and victory in the 2016 Superbowl could not have been without hard work and perseverance.
NEWS AND FEATURES
News & Features Around The World