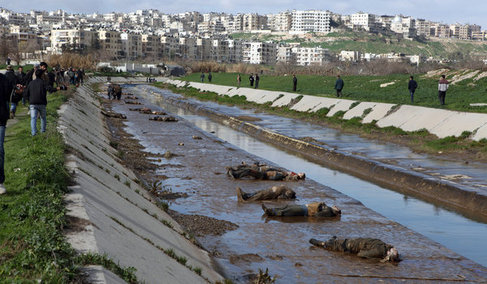 Human bodies line the groung close to water in a gutter. (Courtesy: BBC)

Discovery of dead human bodies in Aleppo, believed to have been dumped by unknown
killers, has drawn world attention to calamity of war in Syria. In a reaction to the bodies
numbering over 50, the United Nations envoy'to Syria, Lakhdar Brahimi made a renewed
call on the  need for international community's intervention in the country, New York Times
reported.
According to him, the Security Council cannot continue to say they are in disagreement
and wait or a better time to intervene to save Syria.
He was reported to have told diplomats on Tuesday that the situation in Syria has reached
unprecendented level of horror. He said further that the country is breaking up before
everyone's eyes and only the international community can help, first and foremost the
Security Council, without allusion to unsuccessful efforts in the Security Council due to
games of diplomacy by China and Russia on one hand that support Bashir-al-Assad and
Western countries that are against Assad.
As for the human bodies, the government and the opposition are accusing one another of
responsibility. As it is usually the case, the opposition and the HumanRight are accusing
the government and the government is accusing the opposition.
NEWS AND FEATURES
News & Features Around The World