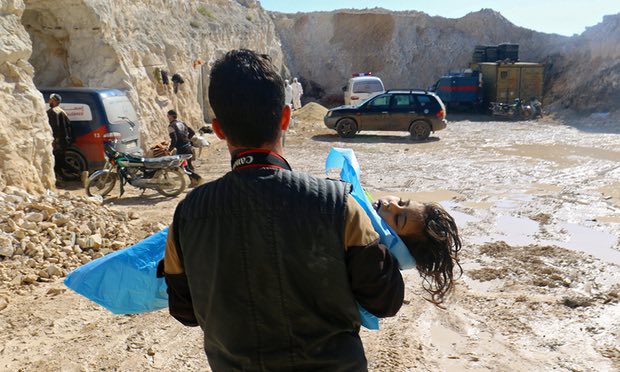 An innocent victim of death by gas in Syria
86 people have reportedly died from the deployment of gas in Syria and the victims include women and children. But there is a confusion about who actually may have deployed the use of gas.
Amid the confusion, the United States has said that President Bashir Assad is responsible for gas deployment and mass killings. But Syria is saying that Assad is not responsible for deployment of gas and the mass killings and instead pointed an accusing finger at Al Queda.
The U.S. Secretary of State, Rex Tillerson, said in a statement that Syria is responsible and that the U.S is making efforts with consultation with allies on the possibility of a need to end Assad's regime in Syria.
In another report, John McCain  (R-Ariz) the high ranking member of the U.S Senate may have revealed what he said about President Donald Trump's decision for a military intervention in Syria. While Tillerson has reportedly said he intends going to Moscow next week to sway Russia against Assad.
Although, Trump is touched by events in Syria and has said that seeing young children dying from gas deployment is abominable. But is still being viewed as hasty to decided on military intervention in Syria without facts to give Americans about who owns the deployed gas and whether it has indeed been hit by mistake effecting its deployment. Despite that Trump has said that all the evils in Syria are happening under Assad as a leader.
People are saying that Syria has been on fire for a long time, possibly beyond redemption without God's intervention. It is remembered that the Obama administration's failure to intervene militarily in Syria has been informed to save America souls and wasting the country's resources on military interventions abroad.
Another problem from emanating information is the timetable mentioned by Tillerson. He said the first will be to defeat ISIS. The second will then be stabilizing Syria to avoid further civil wars and third will be what to do about Assad. How many years will these take is unknown.
But is clear that Tillerson will get the ears of Russians concerning the need to defeat the ISIS, stabilize Syria to avoid prolonged civil wars. But it is said that it will be hard for Russia to decide to give up on Assad, whom Russia has been protecting all these years with Russian soldiers and ammunition fighting on Syria's side.
The danger of another military intervention will no doubt be far reaching with Russia, China and Iran on one side and America and her allies on the other. Russia and China have been influencing factors in the United Nations against America and allies' efforts to get Assad out. What will America and the allies do without going through the UN? And would America military intervention be alone without the UN's approval?
Russia may allow the UN's resolution on military intervention in Syria against the terror groups, but the country will possibly ask the Assad's removal be removed from such a resolution.
NEWS AND FEATURES
News & Features Around The World