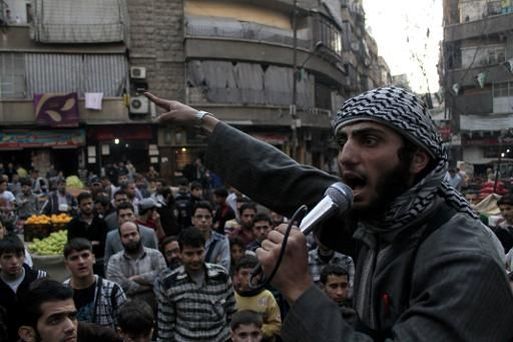 Confusion in Syria (Courtesy:japantoday.com)
Rebels fighting the Bashir Al-Assad's government in Syria have formed a coalition and they have turned the guns against the Al-Queda forces, reports reveal. They  describe the Jihadists as worst than Al-Assad! They say the Sunni Jihadists kill minority groups like Shia Muslims and Christians toward a plan to turn Syria into an Islamic empire.
Observers say moming amid effort by the United States to influence Iran toward ensuring an end to the fratricide in Syria means the fighting has become a three dimensional or triangular war.
First the rebels are working to eliminate the Al-Queda forces, which they see as constituting more than a clog on the way to defeat Al-Assad's impunity. They say that even after Al-Assad may have been defeated, Al--Queda plans to impose the sort of Islamic government that may wipe away the gain of getting rid of Assad.
Some other observers are actually talking about a suggestion that the rebels may join forces with Al-Assad to battle the Jihadists.
Others ask whether the ordinary Syrians bargain for this endless and confounding trouble that has given birth to a confusing theory that now seems to favor Al-Assad? The answer is obviously in the negative. The forces that are fighting for power are the elites and the ordinary people who know nothing about the cause of fighting are like the grass that suffers when two elephants fight.
Another question that curious observers are asking is how successful will the rebels be in their effort to eliminate the Jihadists? Will the Jihadists fold their arms and watch their members eliminated without turning the guns against the rebels? Will the fighting between the rebels and the Jihadists not open a door of outright victory for Al-Assad forces? Is Al-Assad not being proving right about what he has been saying that the war in Syria is not about a revolution, but Jihadists' plans to Islamize Syria?
The conflict between the rebels and the Jihadists is reportedly localized around Aleppo, Idlib and Hama. The Jihadists operate under an umbrella of  Islamic State of Iraq and the Levants,ISIL, with a stronghold in the Northern city of Raqa. About 34 Jihadists are said to have been killed by the rebels in an effort to take over control of Raqa.
The confusion in Syria is called a second revolution. Observers are worried that the first revolution has not been concluded and a second revolution has emerged. They say that by the time the confusion in the country will be clearer, a multiple revolution may have been recorded.