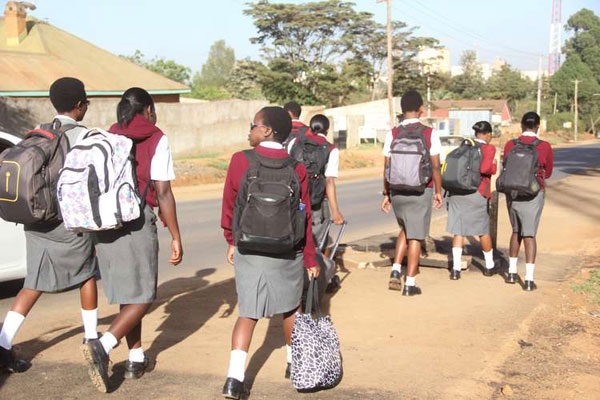 Kenyan children whose future is on hold due to teachers' strike and government's lack of reason (Courtesy: Kenya Daily Nation)
Despite the opposition party's threat of a plan to work toward the impeachment of President Uhuru Kenyatta, the Kenyan president has vowed not to accede to the teachers' pay rise. The opposition party, according to the Kenya Daily Nation has joined the teachers' and seeks that the government honor court orders.
President Kenyatta is reported as saying he is ready to pay the supreme price than give the teachers' the pay rise. The president has not said anything to show concern for the kids,since the beginning of the teachers' strike early September
It is a common saying that when two elephants fights, it is the ground that suffers. In the case of the loggerheads between the government and teachers in Kenya, the children have become the proverbial ground that suffers. The children have not only been barred from school due to the teachers' strike and government's seeming lack of wisdom to manage the crisis, the government on Friday ordered that all schools be shut indefinitely.
The government order to shut the schools reportedly arose over its continued decision not to accede to the teachers' request for a pay rise as ordered by a court of law. The government's order has aroused concern among Kenyans, including the opposition party, which says it is preparing for President Uhuru Kenyatta's impeachment, for disobeying a court order and utter disregard for the rule of law.
The opposition, Cord, is set to hold a rally on Tuesday at Uhuru Park Center. The party said it had notified the police about its plans for the rally. The party has ordered that the schools, including private schools reopen and not shut indefinitely, while negotiation continues over the pay rise.
Determined to achieve its aim, the government is reported by Daily Nation of a plan to resort to the court of law to argue the the constitutional illegality inherent in a court order for a pay rise, and that the country's attorney General will argue the case. Kenyatta is reported to be adamant to play along with the pay rise, which to him will promising what you don't have ability to pay.
Kenya teachers' pay rise crisis, the government's seeming insensitivity and because its impact on the country's children, it has become a ticking time bomb for President Kenyatta's government. But do Kenyatta and his deputy, Ruto know this? Those guys don't seem to be concerned about the children's plight in this matter. They are not talking about meeting the teachers for deliberation and see if there can be a solution to save the kids.
Aren't the two leaders human or do they think they are fighting just the teachers, and that the children don't come into the matter or count?
NEWS AND FEATURES
News & Features Around The World