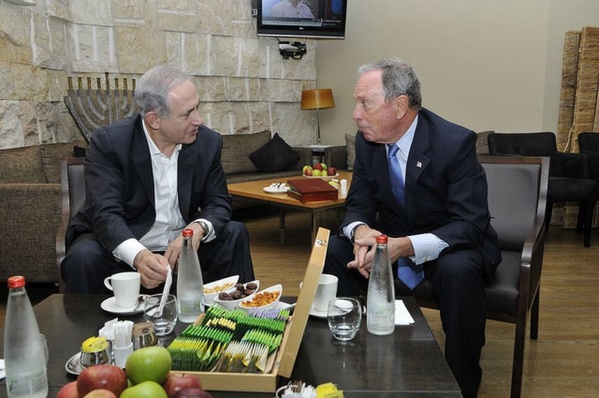 Netanyahu and Bllomberg (Courtes:newyork daily news)
Former New York City Mayor Michael Bloomberg has a grouse with the flight ban on the Tel Aviv airport, news report has revealed. According to a report on CBS Channel 2, the mayor said it was not alright for everything to be shut down in Israel over the feud between Israel and Palestine.
"Halting flights here – when the airport is safe – hurts Israel and rewards Hamas for attacking Israel. Hamas wants to shut down the airport; we can’t let that happen, "Bloomberg said and added "I am a pilot – and I’ve always believed the FAA does a great job – and still do. But on this issue, I think the agency got it wrong."
The former mayor was welcomed to Israel by Israel's prime minister, Benjamin Netanyahu with an embrace. There was a report earlier today of a Delta Airline flight that diverted from Tel Aviv to Paris. One servers said a diversion from a war zone to a safer route was preferable to allowing an aircraft running into rockets and endangering innocent lives. Mayor Bloomberg's position is antithetical to generally acceptable views about the need to ensure safety for travelers in war zones.
Tel Aviv airport was reliably shut down following a near fatal hit of a plane by a rocket. Many people thought the flight ban on the airport was a wise decision, baring in mind the attack on a Malaysia Airline commercial flight in Ukraine, another war torn country.
Mayor Bloomberg said his visit to Israel amid the crisis in the country was to show that it was safe to travel through the airport, and to show solidarity with Israel.
NEWS AND FEATURES
News & Features Around The World