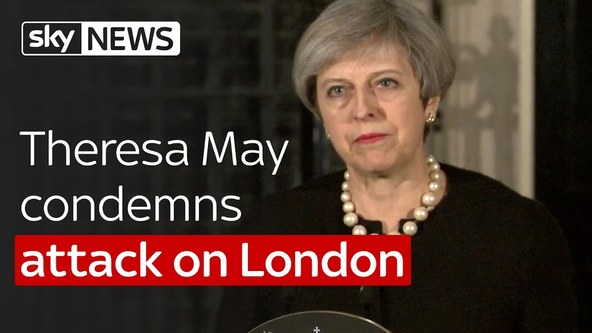 "Enough is enough," Prime Minister Theresa May said, in reaction to the Saturday night acts of terror in London. She added that Britain's handling of terrorism needs to change.
It is the latest story about grappling with crisis, the type no one wants to see happening in his or her neighborhood.
When crisis becomes like a monster that the family has to grapple with, and family members are no longer save in their own home, family head will have no choice than to device ways to keep family members save from the monsters that are threatening the peace.
Peace is what every society wants and deserves. For impossibility of total peace, the police was devised to take care of unavoidable crisis. But unlike ordinary crisis, terrorism emerged like an over powering monster, seemingly beyond policing. Then, all forms of extra policing strategies begin to emerge.
Like the head of a family losing grip of keeping the family safe, leaders in the western world facing the monsters are now finding it tough to enjoy deserving happiness with the monsters wrecking havoc in their domains. In Beowulf, the killings began by monsters and later developed to strives, feud,betrayal,vengeance and a grim world. There was the fight over treasures between monsters and leaders, attended by unlimited killings that threatened humanity.
In Beowulf, the monsters lived in a marsh outside the human community. But the modern terrorists live among the people. The monsters in Beowulf, like the modern monsters, are insensitive to pain and human sorrow. In Beowulf, the writing revealed, "They were hard times and heart breaking for the king; powerful counselors, the highest in the land lend advise, plotting how best the bold defenders might resist and beat off sudden attacks."
It was a time of steady affliction and too hard an ordeal for the king. Just as it is for the modern leaders, who may have promised to stop terror acts as parts of the reason voters may have considered them for office. Inability to stop the bleeding may mean loss of votes in next elections, as voters may choose others, who will promise to help stop the bleeding.
The killing and the shedding of blood of the innocent people need to stop. It means that Britain needs leaders, who will confront terrorism and stop the bleeding without allowing political correctness stand on their path. Three sudden attacks in three months with over 30 souls taken by terrorists begs for attention. Terrorists using vehicles and knives against people on the streets have assumed worrisome dimension in the United Kingdom.
It is the sudden nature of the terrorists' attacks and the loss of lives that are the major problems. For example, the terror alert in the U.K was raised to critical following Manchester's attack, with reports about imminent attack. but the alert was lowered back to sever a week later. Nothing was seen about an attack in London less than two weeks to the Manchester's mayhem.
Prime Minister May said that enough is enough. The monsters heard her. But no one knows where the monsters will strike again. It may be London. It may be outside London. It may not even be in the U.K. Before the latest London acts, the monsters killed over 80 people in Kabul, Afghanistan, in an area considered a safe zone. It is what has given modern terrorism the image of an over powering monster.