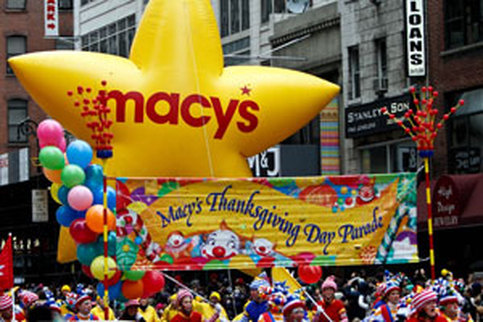 Every Thanksgiving Day in America, Macys holds a parade
This morning, a thanksgiving day in the United States, a guy on his way from a transaction at a check cashing center is greeted by another guy who is standing by the road with his backpack on his back.
"Happy Thanksgiving!" the guy greeted with a mild exclamation. The response from from the greeting recipient is a little warm, but lacking the excitement one would have expected, seeming to have been caught unaware by the greeting from the other folk.
After the recepient has walked past the guy with the backpack, he looks back and wonders why the guy is at a bus stop with a backpack on his back early on a Thanksgiving day, remembers that the guy may possibly be returning from work or going to work and feels that having a job must have made possible a roaring thanksgiving wishes from the guy and that even today some will be at work.
He remembers that he heard a woman said in a telephone conversation telling another fellow that another fellow will be working at the Macy's Thanksgiving Day Parade in Manhattan, in the course of a ride in a B35 Bus on Church Avenue in Brooklyn before the Thanksgiving day.
Some people think about work and ability to make money as what have made thanksgiving possible or the rational that has given birth to thanksgiving. They believe that when a man or woman has worked round the clock for eleven months; not fallen short in rent or mortgage and other bill payment , and in good health that these are justifiable reasons to give thanks in appreciation of the opportunities. Even when one has not paid rent or other bills as when due or falls short in anyway, they say there is still a reason to be thankful for being alive and having hope to confront the mountain of life's problems as one optimistic of one day becoming a conqueror.
Some people like this reporter believe that everyday is a thanksgivings day. They believe that there is nothing wrong setting a particular day aside for a special thanksgiving. They say Christians go to the Church and give thanks during service for what God may have done for them from time to time and the same is said to be applicable to Moslems as well as traditional worshippers. Everyday when something spectacular happens, people offer thanks to a creator. There are times that unbelievers who don' t believe in a universal God unwittingly give thanks to God.
Many respondents to Global Pentorch interview say that giving thanks is humans' way of expression inadequacies and limited abilities as humans. They say many people set out to conquer the world, but have little to show for their effort, while others who have not even set out for any purpose count their blessings amid grace.  Many people achieve what they hardly think possible in their lifetime.
Yet, many people believe that no matter our goals and achievements; no matter where we are or where we are going, what we think we are... that the most important is to be appreciative of who we are as humans, what we have done to advance humanity as we are merely instruments in the hands of an unseen maker who gives and takes life, and that it is in thanking and hoping for continuous grace that makes life goes round.