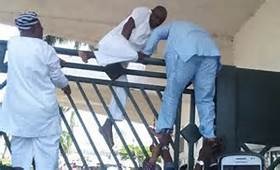 Legislators scaling fence
There was a drama at the Nigeria's National Assembly complex in Abuja on Thursday, following the return of the House Speaker, Aminu Tambuwal, his first official appearance in the complex after his defection from the People Democratic Party, PDP,  to the All Peoples Congress, APC.
On arrival in the complex, the speaker and his supporters found the complex under police siege and needed to identify themselves to the police before they could be allowed in.
The speaker and his supporters said the siege was the handiwork of his political opponents in the PDP, and that there was a plan to remove him through impeachment by members of his former party. Some other sources say that the police siege was to prevent APC legislators from executing their plan to impeach the President Goodluck Jonathan.
Whatever was the cause of the police siege, it led to pandemonium. And the confusion was real, with legislators who had formed a wall of defense around the speaker jumping the fence to access the complex after the police had allowed the speaker in after identification. The police resulted to the use of tear gas to keep the peace.
It was here that the cause of the confusion became manifest that the speaker's supporters felt it was an insult for the police to ask the speaker to identify himself before he could be allowed into the complex. The result was that some legislators who accompanied the speaker became law breakers and no longer law makers.
The question is still unanswered about what Tambuwal really wants to achieve with defection from the ruling party to the opposition. He went to court and challenged the police inspector General and some PDP officers for withdrawing his security detail. Twice, the court adjourned the case and asked both parties in the case to keep the status quo. but on November 17, Tambuwal withdrew the case for the court. And that was not all.
Immediately after his defection and the controversy that followed it, some of his supporters bought the presidential candidates' application form for him to contest the presidency under his new party. The media reported that a powerful caucus of the party led by Boka Tinubu in the South West of the country had given the speaker the support to run for the presidency against General Mohammed Buhari. The speaker suddenly turned into an instrument of perversion, first in the PDP and later in his new party.
He had thrown the party on whose platform he was elected into the House into the bin, and he had become a cause of estrangement in his new party. But suddenly, he turned and said he was no longer contesting the presidency, and will rather go for the governorship contest in his state of Sokoto.