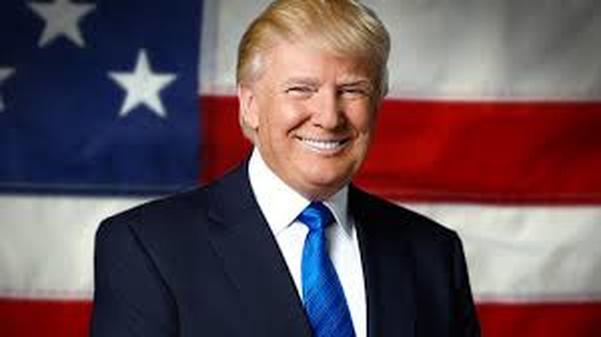 President Donald Trump
Politicians in both the Democratic Party and the Republican Party had ousted themselves from consideration for the president's office before the election campaign began.
​   People were fed up with career politicians and Washington for their lack of performance or carelessness about the people's welfare..
The line up of presidential candidates showed only two people were non-career politicians. The two non-career politicians were Donald Trump and Dr. Ben Carson.                              .  Everyone knew Trump as the wealthy real estate guy from New York City, who was a donor to virtually all politicians who sought poltical office, but was seeking political office himself, for the first time.
On the Democratic Party's platform, there were three candidates.Martin O'Malley dropped out early, leaving Hillary Clinton and Bernie Sanders, to slug it out.
We all are aware by now how Trump slugged it out among the Republican Party candidates and became the party's flag bearer. We all are aware of his proposition to ban migrants from certain countries considered as hotbed of terrorism to keep the country safe and how some among the Republican Party candidates opposed and turned against him, and that despite their fierce opposition to his proposition, he slaughtered them politically, one after another, and emerged victorious.
We  are also aware how Clinton emerged as her party's candidate with later information about how Sanders was sidelined by his own party. A political contest winner cannot emerge without voters approving his or her plans. Republican Party voters, not the Republican Party establishment, approved Trump's plans from the beginning against the party's establishment, which worked tirelessly with some of the presidential candidates to derail Trump unsuccessfully. Unlike the Republican Party, Clinton, whom no one knew her party had a plan that only her was wanted as a candidate began to have problems first with Sanders supporters with the release by Wikileaks, of her party's plans for Clinton and Sanders merely in the race symbolically.
Aside from the Sanders' supporters in the battleground states chipped away from Clinton, her other problems about the use of private email server as secretary of state and the conflict with the FBI throughout the election period helped cement Trump's support in the battleground states. But in New York, people began to ask questions about whether with his lack of political experience and knowledge of Washington, he will be an ideal president and his support began to slip among New Yorkers, where as a Blue State, he hardly just little chance anyway to compete with Clinton.
Trump was not liked and Clinton too was not liked by voters. But it became compelling that Americans must vote for one candidate to emerge as a president. The liberal media did a good ground work for Clinton to maintain her momentum in Blue States, and how that did not affect her fortune in the battleground states missed comprehension. Well, Trump emerged the winner and he was sworn into office. He is the country's president but untutored about politics and the ways in Washington. He will have to learn the ropes. He has to. It will not be easy. And since he is not a career politician, the fact that his acts as a president are not tailored to that of career politicians are first acts of change that Americans have witnessed. It is the dilemma that Americans face today - dealing with a non-career politician in the White House. Americans must come to grasp with this reality and that it will take sometime for him to master the craft.
​    Always on twitter. Should he be forced not use twitter as the media has been trying to force him to drop the twitter?. I don't think so. I think he should be encouraged to use it, but be advised to get books on dos and don'ts about the use of twitter. Communication graduates will attest to the fact that as communication experts, they are not immuned and no one is, from being extremely careful in the use of twitter, and as a president, Trump must be aware that he will be responsible for whatever mistake he makes using any form of communication. And that as an adult, he will be answerable to all his actions.
​    President Trump must be informed by his handlers he needs the media irrespective of the differences in the ideological bent of various media houses. His administration must seek a way to douse the fire between him and a section of the media and that the news media must be allowed to do its work without restraint, but that the media too should cease from any declaration of war against the president on partisan political  or ideological ground.
The media is supposed to be a source of education for the new president, while he navigates the difficult task of governance and uprooting the barricades between Washington and the people. Trump and his handlers should understand that the executive cannot hinder the judiciary from its work, need to understand the separation of power between the the executive, the legislature and the judiciary. The media has enormous work to do, to be patient for the president master nitty-gritty of governance and not seek to pull down the house.
It is not unusual for the president to be unsatisfied with outcome of court cases, the executive could appeal any case to the Supreme Court, without allowing personal vendetta to come between his office and the judiciary. One good development is that the Republican Party has rallied around their president, but they should remember he is also president to all Americans, and how he goes about fulfilling his campaign promises without alienating any American on the basis of religion and political differences, is very important.

Well, Trump emerged the winner and he was sworn into office. He is the country's president but untutored about politics and ways in Washington. He will have to learn the ropes. He has to. It will not be easy. And since he is not a career politician, the fact that his acts as a president are not tailored to that of career politicians are first acts of change that Americans have witnessed. It is the dilemma that Americans face today - dealing with a non-career politician in the White House. Americans must come to grasp with this reality and that it will take sometime, for him to master the craft.