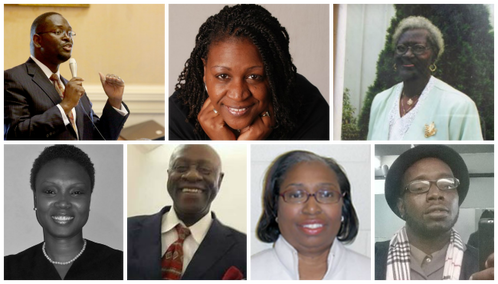 Some of the parishioners who became instant Saints after they were killed in the Church on Wednesday
How would people feel this Sunday going to Church for worship? First, the Charleston's experience would have to be a major issue of discussion among Christian worshippers. Although, people have heard of terrorists who bombed Churches in Nigeria or Pakistan, or the bombing of A Church in Charleston during the heady racism days, but no one would have expected the type of domestic terror that claimed the lives of 9 parishioners at the Charleston Church to happen in the 21st Century and certainly not in a civilized country like the United States.
People go to the Church every Sunday to worship God. It has been that way for a long time. It is done without anyone fearing that a mad man will come into the Church and begins to pump bullets into innocent souls. But that may have changed since the event in Charleston, South Carolina, where 21 year old man entered the church during a Bible Study session, sat close to the pastor, had an argument on the topic of discussion, before he began to pump bullets into people, whose main purpose of attending the Bible Studies was to have abundant life and not death.
I can tell you that on this Sunday, ushers in Churches would have received new training modules about how to handle new comers, applicable to Churches where the spirit of love and readiness to give away the soul for the Gospel is not properly planted. Pastors in such situations would be thinking about new procedures to handle new comers and new comers would have to be ready to entertain many eyes following them about at the same time, because we believe that no one goes to the Church to die but to live, and that if living becomes difficult and almost impossible, the Church is where to go for remedies.
How would the Charleston's experience further push the Church towards the abyss, considering that the Church is already going through trying times of soul winning for what people have termed the new get rich quick Gospel and the attitude of those who have turned the Church into money and material spinning miracle venue. New comers are bound to exercise restraint going to the Church, especially in the U.S where bullets are not in short supply, but the problem is how to curtail its useless use. Soul winners may have to be ready to answer a question like if I come to the Church would there not be bullets? One would not be surprised to hear such a question from unbelievers, because in truth the Church is a place where people hug radiating with happiness and no one goes to the Church to hug bullets.
The Church would have to prepare new ways to convince unbelievers whose souls are to be won that the Church is safe and that such cases like the one the world heard happened in Charleston is rare. And like a gentle man tried to convince me that the death in the Charleston Church is not useless death and that it is part of the persecution the Church has been suffering from the time of Christ, bringing into the context the killing of John the Baptist by beheading upon the request of a young daughter from a mad father who was in the same mould like Mr. Storm Roof. Our discussion then dovetailed into the killings of Saint Stephens by stoning and others after him, after the crucifixion of Christ.
We both agree the Church would now have to make it part of its job to make it clear to the new souls to be won that death can come in the Church before people start go to seek reliefs in the court room for people getting killed in the Church, especially in America where it is possible for anyone to say the promise given to them is life and not death. There are enough verses in the Bible that say persecution and death for preaching the Gospel is not impossible. Christ said it that if he was so persecuted, who were his followers to escape persecution? It is the cross the Christian carries for preaching the truth. It is why the death of the 9 parishioners while studying the Bible make them instant Saints.
So going to the Church will either make one a Saint by dying for the Gospel's sake, or one would have to wait to be judged in after life to know one's fate. It is a choice that is open for anyone who wants to be a Christian.
NEWS AND FEATURES
News & Features Around The World