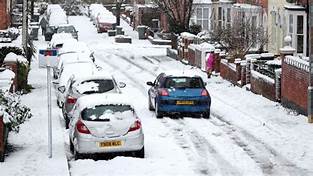 A street covered in white following Monday's snow in the North East area of the United States (Courtesy: news.sky.com)
The first and second day of snow seem to have passed with uncertainty still hanging in the equation. Weather forecasts about the first day of snow was enveloped in uncertainty. The second day of snow, continued without assurance whether the snow could continue into Tuesday or had ended on Monday evening.
People talked about the first day of snow but the day's snow began with a mixture of rain and hail and wet snow. At the end of the day, iIt seemed it had not snowed at the end of the day, because there was more rainfall than snow..
Many people did not want snow anyway and they heaved a sigh of relieve that Sunday ended without the disturbing factor that usually accompany heavy snow experience - too much ice on the side walk, shoveling snow and removing snow from cars. And people slept hoping for no snow disturbance on the way to work on Monday. Because many people were unaware there was much more snow on the way for the entire day on Monday.
The snowing on Monday began like a child's play at about 09:00 a.m. And then it became big and enveloped the entire landscape as if it knew most people were already at work. Again, many of those who were home heaved a sigh of relieve snow did not catch them on their way to work or at work. people who may have been scheduled for work in the afternoon and thought the snow would have stopped by the time they would be leaving the house were disappointed, the snowing continued unabated into early evening hours.
For those who left the house and were comfortably at work before it began snowing in the morning, the issue was how to wade the snowed ground and the hard cold weather home. The snow covered about 4 inches to five inches on the ground. But no one was sure it had permanently stopped snowing and that the snowing would not continue through the night into Tuesday.
The result of the uncertainty was the closing of all schools midday on Monday and followed later by an announcement for late opening on Tuesday. Consequent of the failed forecasts for the weekend snow in which some said it would snow on Sunday morning and others said there would be snow on Sunday evening into Monday morning.
Indications show that any snowfall, whether little or big, is an emergency. The ice would need to be cleared from the streets and the sidewalk for vehicles to move and pedestrians to walk, and to avoid avoidable vehicular accidents and fatality from pedestrians falling for stepping on hard ice on the street. Reasons that make accurate forecasts for snowfall important.and the need to avoid inaccurate forecasts.
Comment Form is loading comments...
NEWS AND FEATURES
News & Features Around The World