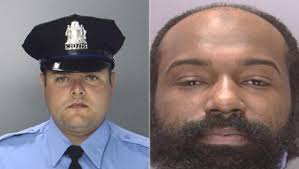 Had it not been for the gallantry of the Philadelphia's  police officer, who escaped getting killed by cheer luck before he successfully brought down his assailant, Americans would have been mourning the loss of another officer as a victim of go lucky and gun totthing lads on the street. It was the first thought people had on hearing that another police had escaped death after he was shot 13 times on Friday. Then, the matter took on a different dimension with the news that the assailant, Edward Archer, said he had shot at the officer in the name of Islam.
The officer, Jessie Hartnett, reportedly did a fine job by getting his assailant alive, making it possible for to be interrogated and  examined for his sanity or insanity, toward verifying the authencity of his rants that he had shot at the officer in obedience to the name of Islam.
News report said that it was the statement uttered by the assailant who shot at the police officer at close range. And when the video of his action became public, the assailant who wore a flowing white praying garment that matched his words as what he said he represented in his own words.
The words were not forced into his mouth. It was what he said as he reportedly pumped 13 bullets at the officer who sat quietly in his car. 13 bullets and the officer was lucky to have escaped death. It was a piece of news break that left most Americans awe struck with questions about another terror attack again, coming at a time when Europe is embroiled in arrests upon arrests and suicide vests being recovered amid reports of yet to be carried out plans of terror attack.
Observers across the U.S wondered what the hell was happening about another attempt at a police officer's life, barely three days after President Barack Obama announced a new gun measure, amid the hoopla of Islamic terrorism and Donald Trump's suggestion that Moslems be temporarily halted from coming into the country, to allow the country's representatives determine what is happening.
Then as people wondered about was could be happening, one of the specialists that cable televisions alway's call upon to talk about and do analysis on  developments advised the public against jumping into conclusion while investigations were yet inconclusive. He said that it was premature to say or believe what the assailant said that he had acted in the name of Islam. The specialist said that it is possible that the assailant may be insane, because according to him there are scores of sick people outside in possession of guns.
Although, the gun used by the assailant is a reported stolen police gun, according to a police statement. But yet curiosity shows that whether the assailant was sane or not, the media was not wrong in reporting what the assailant reportedly said and the public cannot be said to be wrong for believing what the media reported about what the assailant said. Manifestly, with the public being told how to perceive news reports to avoid creating a dangerous situation, though what the public heard was the truth, it seemed the arrival of a strange time here. Hear, but don't believe.
Observers believe that investigators have the freedom to do their investigations, including ascertaining any assailant's mental situation. Many people believe that investigators ought to have completed their investigations, including ascertaining the assailants mental situation, before any specialist can come out to advise on how the public should perceive any situation. It is believed that if investigators' finding is that the assailant is insane, it will still not be an excuse for any official or specialist to tell the public on how to perceive a dangerous situation, especially when such perception is based on the truth.