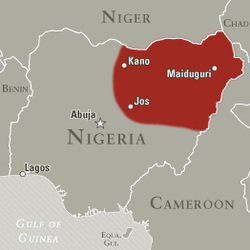 Most affected area by terror in red
Uncertainty pervades the whereabouts and safety of some of the innocent children carted away from their school's hostel in Chibok, Borno State of Nigeria. Almost over one week of their abduction by terrorists, words have been making rounds about their ordeal and the horror of terror on innocent children.
The military say a large number of the girls have been freed; others say few of the girls escaped from the terrorists and some others say safe the few who have been freed, about 99 of the girls remain terrorists' captives, while their parents and authorities are searching forests for them.
"All I know is that we have only14 of them, and the security people especially the vigilante and the well meaning volunteers of Gwoza are still out searching for them.The military people are also in the bush searching for them," Asabe Kwambura said in a statement.
The news of the abducted girls became public immediately after a blast that killed over 75 people in the Abuja motor park. Like those killed at the park, the girls and other students who have been decapitated in their hostels by the terrorists are innocent and unarmed people. The hallmark of Boko-Haram's attacks, since government forces forced it away from attacking in Abuja, has been attacking unarmed and defenseless people. This raises a question about why the terrorists have chosen unarmed people in their war of attrition against the Nigerian government over its hatred of western education and demand for an Islamic government.
It had attacked a police station and the United Nation's building in Abuja. Apart from these two spots, all its attacks have been on innocent people in their homes, places of worship and schools. Boko Haram's choice of attacking innocent and unarmed people cannot be far from the fact that it may have found it difficult to access well policed government office and installations. Kano, Kaduna, Maiduguri and Jos have been major towns Boko-Haram has concentrated its attacks before and after its displacement from Abuja. Its recent attack at a motor park in Abuja killing over 75 people marked a renewed presence in Abuja.
What has stupefied observers is how Boko Haram has been waxing stronger against expectations that as an organization suspected as doing an inside political hatchet job for those dissatisfied with the government, its continuity will end with arrests of its alleged sponsors. Almost five years, no single well heeled Nigerian politician has been arrested and charged for sponsoring the deadly organization, safe a senator facing charges for its connection with the organization and whose appearance in court has been stalled for lack of witness.
NEWS AND FEATURES
News & Features Around The World