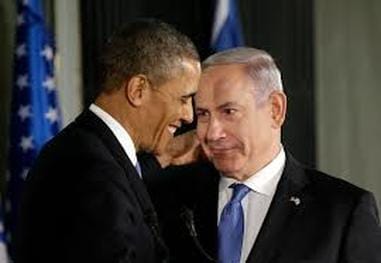 President Barack Obama and his Israel counterpart, Benjamin Netanyahu
Despite the White House favoring the two states resolution in the Palestine and Israel imbroglio, the U.S. Congress has decided to sanction countries that have voted for the resolution against Israel in the United Nations, according to a report by the Fox News.
This is no fake news that is no news. It may seem like a rumor that does exist, but one that lacks perspective, blame the insanity of diplomacy.
At least, in term of news, if it does not at all seems like news, it will represent the part of a whole, because people say in every rumor, there is a semblance of truth.
This is a real news representing facts without embellishment, and to which no reporter has added his or her own opinion and it has a protected source.
The different in colors of news and opinion is one reason that news are separated from opinion in the modern newsroom, unlike in the days of yore that the news and opinion travel together.
Today, the news is regarded as sacred and the latter as free. But with many news outlets and the lifecycle of news limited to 24 hours, every news outlet try to write own angle of the news and giving the news perspective based on its own political coloration.
Imagine watching the CNN and the Fox News channels reporting differently on the United Nations' resolution on Isreal's construction of settlement in Gaza, and its effect on having a two state for a lasting peace.
One channel focuses on the realtionship between the United States and Israel and the betrayal that the not using veto power to protect Israel, a friend of the U.S. represents.
The other channel focuses on the president's decision to make Israel forgo construction of settlement and to force a two state solution as a way to achieving a lasting.
But the news in this development is that the U.S. has abandoned Israel  and exposes her friend to unacceptable excruciating challenge, which the use of the veto power could have  prevented in the UN  and then paves a way for continuing diaolgue, without showing that your friend is doing something morally unacceptable as the U.N resolution has painted.
Russia has been using its veto power in the U.N. for the  sustenance of Bashir al Assad's power in Syria, despite the ​immorality of seeing so many lives lost. Another big news came with John Kerry's news conference for the justification of the abandonment of Israel.
And now, Hamas has suddenly turned into a militant group in the U.S. latest political and diplomatic dictionary. Hamas is no longer a terrorist organization as earlier dubbed in the U.S. involvement with the Middel East imbroglio.
Although, the U.K. voted in favor of the U.N resolution, the country nonetheless criticizes Kerry's description of Israel government "as the most right wing" in Israel's history. The BBC reports of U.K's position show that the spokesman in May Theresa's office said that it was inapropriate to attack the make up of of a democratically elected government of an ally. The U.S. State department said it was surprised by the U.K's rebuke.
But the question many people are asking is why vote for a resolution as the U.K has done, when you are aware that it is not only the construction of settlement that has caused the practicability of a two state solution and that the Palestine is as culpable as Israel in the matter concerning its own terrorism against Israel?
Whatever may have made the White House to ditch diplomacy to want to force the truth is aprt of the insanity inherent in a game that requires diplomacy, but some of the players choose to force the truth and wrongly allies wtih a terror organization.
NEWS AND FEATURES
News & Features Around The World