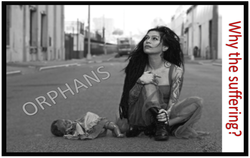 There are political and economic struggles In virtually every country of the world, and there is no country that can claim to be an oasis of peace from the argument about the human journey, the human suffering and the cause.
Every child grows up to learn about the peculiarity of what has become a scene of trouble in his or her own country through various religious stories and tales.
Some of these stories and tales, mostly about the beginning of the world and humanity, are believable and others are completely difficult to believe. Some of us have grown to continue believing some of these stories and tales, while others have become atheists - expressing disbelieve in the stories and tales and the religions that use them as sources of instruction. Some children are fortunate to have these stories as sources of instruction and others are unfortunate, growing and living outside the words.
The story of the creation of the world, the creation of the man and the woman, their early life in the Garden of Eden, their trespass against God and God's pronouncement of punishment on them have fascinating links and bearings to the current state of humanity, the way we labor, the way the woman conceives and bear children. The stories also point to the beginning of human encounter with good and evil, and  the beginning of human migration in search of survival.
What happened in that far away time between God and his first two creatures seemed like a perfect foundation for today's struggle, endless toil and presents the politicians' the reason to mesmerize humanity with promises to unburden humanity from the burden of the curse. Are the politicians, whether as autocratic kings or born again democrats attempting to undo what God has done and how far have they succeeded in their bid?
Reading through the chapter 3 in book of Genesis and deducting from the knowledge the book imparts, the answer is that one knows the beginning of the human journey,  the first act of the first humans and God's severe judgment on them. Despite the difference between the time of the event and now, the woman has continued to have her children in hard labor and the man has continued to toil endlessly without hope of an end to his toiling, while death has become the end of the man and the woman, no matter how successful they become.
In efforts to show people that they are the ones able to help lessen peoples' sufferings, politicians have started their own fights, which tend to add to or prolong human suffering. The political divides and endless economic plans have become part of the human struggle for survival. Many politicians have become rich, rise and fall from proper use and misuse of opportunities to address plethora of problems confronting humanity. Some of the politicians have claimed and actually acted as deliverers, while others have proved to be complete turned coats, enriching themselves using the fight to enhance humanity as
The certainty is that the human suffering is here to stay. The politicians can help ameliorate the suffering, but they cannot take it away. The promise of succor in another life is itself uncertain. Although, some of us who have died and mistakenly returned here, have said that there is a better life there. But as humans, we have to die and be permanent in the other life, to behold the reality.
Everyone believe that life is hard here. And to be safe and lessens the journey's harsh experience, we seek God. The experience from the most hands of God's servants is another story, their love for the lucre and the flesh have shown that no human, whether clergymen or politicians, are capable of playing the role of God and that they cannot undo all that God has ordained.