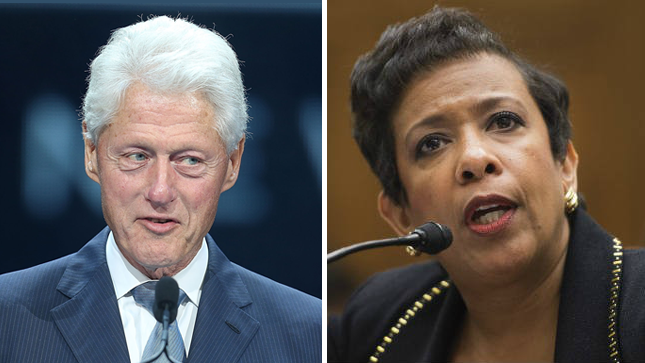 United States Attorney General Loretta's show continued on Friday on the television across the world, from where it earlier stopped, when she met former President Bill Clinton on her aircraft at the Phoenix Airport, Arizona.
According to Lynch, she understands the reason for the question members of the public have been asking over her meeting with Clinton, and she has tried to assure the public that there has been no discussion of the former president's wife investigation in the menu of their discussion.
Has Lynch been able to convince the public of the lack of compromise or conflict of interest in Hillary Clinton's investigation by her office and her relationship with the family of the former president? Lynch on the Aspen show was not convincing enough and she has further ignite the public's anger and more questions about the integrity of the Justice Department, which she tries to project.
Pointedly, Lynch is not the problem in this show, but her meeting or her act of allowing the former president to have access to her in her official aircraft, when she know about a case involving the gentleman's wife and the gentleman's family's foundation.
The criticism against Lynch that has started from the Conservative news outlets has spread and the criticisms have become bipartisan, in the language of Washington politicians. No one is saying that Lynch show with the former president at Phoenix is appropriate, and she also admits as much that her meeting with Clinton as inappropriate! If she agree with the public, why the is her pleading against common sense?
Doesn't common sense dictates what she should do to restore integrity to the Justice Department and reassure the public that social meeting of any kind would not influence decisions on the Clinton's personal email sever investigation?
As at matters currently stand, Lynch has failed woefully to convince the public that she has not put the Justice Department's integrity to question and that her effort to woo the public has failed. The public expects a better umpire for the final decision in  the Clinton's investigation to have any meaning and be acceptable to the public.
President Clinton started this show with Lynch, with a walk across the tarmac to Lynch in her official aircraft. He is the cause of whatever trouble that Lynch and the Department of Justice currently have. As a lawyer and former, president, is not he aware of the damage he is causing by meeting with attorney general, whose office is investigating his wife? And that he should have done everything humanly possible to save Lynch from the headache a meeting with her could cause over his wife's email server investigation?
Aside from throwing Lynch into a show she may not have prepared for, he is also putting his wife's campaign in a damaging situation. What was the compelling reason the former president had that necessitated his meeting with the attorney general?
Curiously, it seems that he could not have just gone to meet the woman walking from aircraft to aircraft just for the sake of greeting and discussing grandchildren and travels.