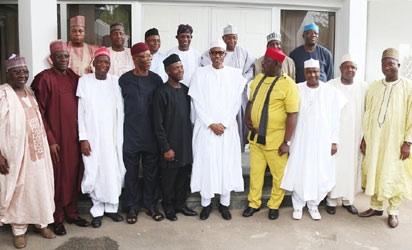 Buhari and his APC governors
African elders have a saying that when a masquerade dances well, the owner will be aroused and encouraged. The saying was manifest in Kenya this past weekend during President Barack Obama's visit to the country. Kenyans were glad as they mostly say because one of them occupies the America's White House, even though they know that Obama was not born in Kenya, and that by the virtue of his birth in Hawaii, he is an American, despite his father being a Kenyan.
Obama's life is equivalent of the case of a masquerade that is dancing well. If President Obama is opposite of what he has achieved, very few Kenyans will identify with him. But because of his achievement and fame, every Kenyan identifies with him. Why wouldn't Kenyans do, when non-Kenyans all over the world do? Just as the dancing masquerade applies to Obama, the same way it is applicable to America, because of America's political and economic power.
Everyone wants to be an American. And where people don't have their way to be called Americans, they show appreciation of what America is. Just last week, President Muhammed Buhari was in Washington on a visit and was so glad he got an invitation from Washington. His list of requests of what he needs America for are legion. First, he wants America to help in the fight against Boko Haram, despite all the foot dragging  America has shown in the fight against Boko Haram. Secondly, he wants America to help in tracing and retrieving money stolen by corrupt politicians in Nigeria and stashed away in foreign banks. According to Buhari, about $150 billion of the countries wealth is in unnamed accounts in foreign banks. It wasn't clear whether or not Buhari had presented this case to Nigerians through the country's National Assembly before coming to America with a request for America to be his Nigeria's police in the world outside Nigeria.
But a Nigerian who heard the colossal amount disclosed by Buhari said he was hearing about the colossal amount stolen by Nigerian politicians for the first time on Buhari's visit to America. He asked why has Buhari not turn to Benin Republic or Ghana or the African Union for help, and why America? Another person asks why has Buhari not turn to Greece or Cameroon for help? The laughing matter in Buhari's disclosure about corruption in Nigeria is his statement that the country has been stolen dry in the 16 years misrule of the People Democratic Party, PDP. However, instead Buhari probing the entire 16 years of PDP's misrule, he will only probe the period of his immediate predecessor, Goodluck Jonathan. So in his search for the $150 billion in foreign banks, he will have to tell America not to go beyond the Jonathan's period of governance, and the period of Olusegun Obasanjo should not be touched, because Obasanjo is sacred, as the first president drafted back into office, by equally sacred former military leaders, with intent to save their ill gotten wealth and escape investigation and prosecution, for the evil they have visited on Nigeria.
Nigerians who have been dancing and expressing joy that Baba Buhari is the only person alive capable of a good masquerade's dance are disappointed, but they still see wisdom in Buhari's dance and resolve to probe only his predecessor, so that all others who have helped bled Nigeria through corruption be left untouched. Of course, for Buhari's supporters, the old man cannot do any wrong, because as their masquerade, his dancing, whether beautiful or ugly, is pleasant to them.
Observers have said that a country that is serious about fighting corruption cannot allow an opportunity of getting to the root of how money meant for workers's salaries was diverted to finance campaign passes by. They say It is another way of fighting corruption by giving money to state governors to pay workers without asking what they did with the money for workers' salaries in the first place. It is why you have a National Assembly, where reports say the senate's standing order was forged, because favored ruling party members failed to win elections to be senate president, and the government realizes that the wife of the man who became the senate president had a case of corruption committed when her husband was a governor, which now has to be investigated, when no question has been asked from those under whose nose Sanni Abacha nearly bankrupt the country.
Observers are saying had Busola Saraki's dance been pleasing to his party's chieftains, his wife would not have become a subject of investigation and there wouldn't have been a case of standing order forgery. It is about the masquerade and how his dance is to his people.
NEWS AND FEATURES
News & Features Around The World