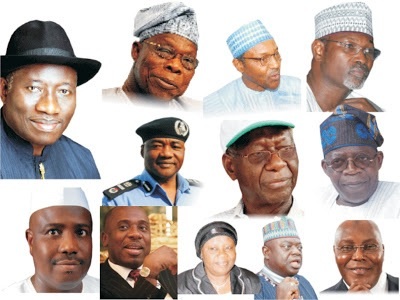 Nigerian political gladiators
As Nigeria's ruling party members flex muscles over the sharing of offices and the booties of office, news reports say that Boko Haram has killed 145 Nigerians in two days. The new government has not appointed ministers. Nigerians have been enveloped with promises upon promises by the ruling party to resolve party members' differences, as if resolving crisis is what Nigerians voted for, and as if the nation is still in a campaign mode.
Some Nigerians are already saying Buhari and his party men are behaving like mosquitoes waiting to be roasted, because the Nigerian ruling party, All People Congress is in crisis, instead of working to fulfill its campaign promises.
The case in Nigeria is a reminder of the aphorism that when two elephants fight, it is the grass that suffers. This applies to any crisis situation, whether big or small, and that It is for the lack of wars and avoidance of wars that the Utopian state of affairs is preferable to the dystopian state, where wars are fought without an end. Crisis, put simply, stalls progress, just as the crisis and the war currently tearing the Nigeria's ruling party apart is having negative effect on the country's state of affairs.
Based on a simple life's experience, just imagine what happens, where the father and mother in a household are always in crisis mode; the children suffer from lack of attention from parents, whose adrenalin have come under the imprisonment of an abnormal situation. It is what has become the Nigerians' experience from independence to date.
While the political protagonists who fight over sharing of offices, turn political offices to avenues to sources of personal enrichment and fight themselves as a consequence, the worst consequence is that the attention needed for the development of the country is abandoned and electioneering campaign promises remain what it is - promises without fulfillment.
As a child, I witnessed the political inferno in the Western Region and the evil political alliances that caused the mayhem. The political mayhem led to the first military coup in 1966. Already, the individual greed by politicians has taken over the need for patriotism and led to acts of corruption first noted as the inflation of contract costs. It was the cause of the first accusation of corruption the soldiers who overthrew the first Republic politicians leveled against the first set of Nigeria's civilian leaders.
The argument over what part of the country will produce the head of state among the soldiers led to the second coup. Manifestly, the evil of the fight over political offices had extended from the individual politicians to envelope the various tribes that formed the entity that became independent Nigeria in 1960. The argument led to the civil war in which millions of Nigerians were killed. Yakubu Gowon, the Nigerian leader who prosecuted the war against the eastern part of the country was himself overthrown and accused of unmitigated acts of corruption.
Nigeria has not recovered from the onslaught of bad leaders and bad government, and the hope for a good government seems to be eluding the country after a vote for change that has again produced a division within the ruling party over the fight for offices and booties. President Buhari has told his party men in to respect party's supremacy. The ruling party's governors have said they are working to resolve the differences among warring members of the party.
Some Nigerians say they are watching and will wait until the government is hundred days in office to air their views. The current crisis in the Nigerian ruling party may not be as bad as the one between Obafemi Awolowo the first premier in the West and his deputy, Ladoke Akintola, who succeeded the former after he went for an election at the center; lost the election and returned with a request for his deputy to restore the office of the premiership back to him.
The story then was that Akintola refused to vacate the premier's office, and instead went into an alliance with a northern party for a fight against Awolowo, his former boss. The fight led to the end of the first Republic. Today, some people said that Bukola Saraki who became the senate president by outsmarting his party would do anything to remain as senate president, against the wishes of his party, and that any attempt to remove him with force, would also be met with force.
Bola Tinubu's boys in the senate and the House want to be given party offices in the senate and the House, because of their loss of office of the senate president and the Speakership of the House to nPDP guys. They are also seeking the seat of the deputy senate president, currently being held by a member of the opposition party, to be vacated in the ruling party's favor, thereby creating room for the senate president and his deputy to embrace the opposition for a survival fight.
Why didn't most of Nigerian media political analysts who are now asking Buhari to accept what he cannot change and move on see the danger Nigeria was moving into with the evil cooperation by Buhari who wanted to be president at all cost, agreeing to work with the Lagos political axis - not known to be political angels, and the nPDP members who walked out against Goodluck Jonathan to commandeer better advantage for office and material gain, which had become elusive under Jonathan? Why did the media in Nigeria misled the Nigeria people to vote for a phony change? Where is Olusegun Obasanjo, the chameleonic corruption crusader, but who in the real sense is Nigerian people's number one political enemy?
NEWS AND FEATURES
News & Features Around The World