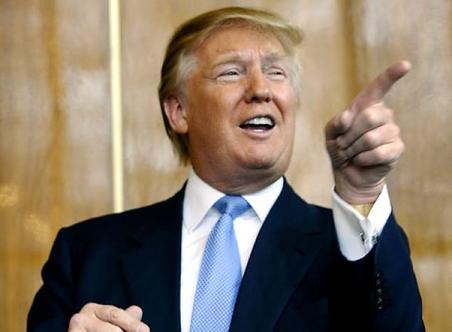 Donald Trump - an American Presidential candidate ruffling feathers over heaven and hell statement (Courtesy: wn.com))
Donald Trump, the American presidential candidate on the platform of the Republican Party, and other wealthy political gladiators around the world, are reminders of the refrain, "Render unto Caesar, what is Caesar's, and unto God what is God's."
The latter is believed as a master over all the universe, and those who believe in his existence, while the former is a master of those who are his subjects in his earthly kingdom.
The Bible that propounds the Caesar and God theory also says that it is impossible to serve two masters, and that gaining the kingdom of heaven is beyond merely obeying the commandments, and that gaining heaven requires selling all possessions and giving the proceed to the poor.
The strict requirement for gaining heaven may have made the road that leads to heaven a tiny path with few people , and the one that leads to hell a wider path where there are many people. This is because no person will sell all for the sake of going into heaven, while people generally will conserve what they have as a source of getting influence or power.
It is why the refrain today is "Seek ye first the kingdom of money and every other thing will be added unto you," unlike the biblical refrain that says "Seek yet first the Kingdom of God and every other thing will be added unto you."
Many people may think it is heresy to sell all they have and give to the poor for them to gain heaven. They say no one has the glimpse of heaven other than the information in religious books, and information about those who claimed to have died, but unfortunately returned to this 'hell' for the poor, after they have seen the beauty of heaven. The hell on earth is for the poor, and the heaven on earth, according to a new refrain, is for the rich.
The rich will do everything humanly and spiritually possible to protect their heaven on earth that comprises their wealth, the comfort and the peace of mind derived from their acquisitions. They are careless about where they will be going after they leave this earth, because with their wealth, there is virtually anything they want or need that they cannot get, in comparison to the pitiful life of the poor - lacking everything that make life comfortable.
When Mary Magdalene anointed Jesus Christ's feet with the Alabaster oil and his disciples expressed opposition to her act, because they felt the oil could be sold and the money used to care for the poor, Jesus said she should be left alone because the poor will always be here, while they will not always have him. He said what Mary did was appropriate.
Soon, Christ was ousted by the power that thought he had too much influence among the rich and the poor. After Christ's death, we learnt the disciples and their followers became one united community, where they pulled their resources together to care for all, and no one was rich or poor. Such a community is very rare today. It only exists in Utopian literature, where writers expose community settings they believe is fair for all, without no rich or poor. The real world remains an entity of some rich and many poor. Equal opportunity before the law and distribution of comfort are political jargons.
Many people believe that it is possible to achieve the Utopian society, but that the rich and the wealthy in the society will have none of it, to avoid them being on the same level with everyone. The rich still believe in the master and servant relationship and that whatever they have acquired must be inherited by their children.
The rich, unlike the poor, have many friends. The same is applicable in general political settings that the rich have many followers than the poor, because the rich have money to do organizing than the poor. And in many poor countries, the rich use the wealth to buy votes from the poor, irrespective of loud campaign for people not to sell their votes, and that doing so amounts to selling a birthright.
But can one really blame the poor for giving away their votes the way it has been noticed, when in the fact there is no political candidate who can claim to be poor or hasn't affiliation to benefit from the rich to gain power and later concede certain rights to them as a result? Head or tail, it is a world of the rich. The poor has become merely an appendage.
People's eyes have opened. Everyone now wants to be rich, and if not rich, at least to be comfortable. And to be comfortable, people need jobs and regular income. It is what advanced countries can offer, and unavailable in poor countries. It is why people will do anything to cross from poor countries to rich countries. And it is what has made the wealthy in advanced countries to be Caesars.
The strive to leave poor countries to rich countries is hooked on the belief that work doesn't kill, but poverty does. Yet, when you live in any of the rich countries, irrespective of your original source, working two or more jobs, or working round the clock - if you are lucky to have a job that pays well - to source the income to make living amenable, will decide how you loath or love poverty. You will understand why the prosperity gospel has been thriving and why many prefer the hell to an unknown heaven.
NEWS AND FEATURES
News & Features Around The World