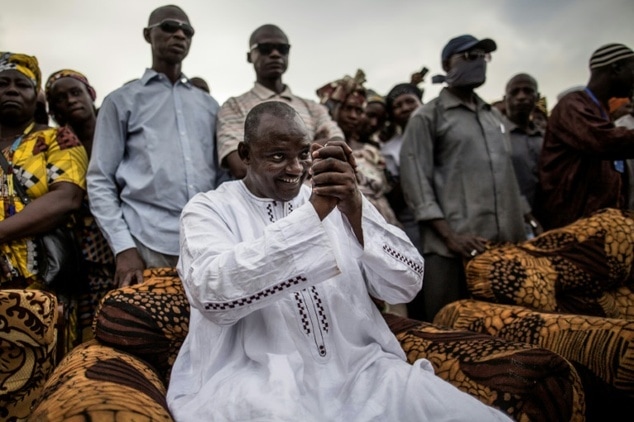 Adama Barrow
Reports emerging from Gambia said that Gambia's newly sworn in President Adama Barrow intends to establish a truth and reconciliation commission, to look into the past 22 years of his predecessor's time in office.
The report said that President Barrow has said he is acting against those clamoring for the arrest of Yahya Jammeh, for him to answer crimes he may have committed, while in power.
The reports said further that the new president prefers truth and reconciliation commission against an arrest without establishing reason for such arrest.
It thus mean that the intention to arrest is already there and the truth commission or whatever it is will just be a smokescreen to fulfil an intention.
The most annoying of the report is that it says it is to avoid prosecution that has forced Jammeh into refusal to relinquish power. This information confirms the conflict that is said to have led to Jammeh's sudden reneging on his acceptance of the election result and congratulatory remark to Barrow.
These revelations confirm the sayings among Africans that without fire there can be no smoke. Meaning that the conflict arising from prosecution or political persecution after leaving office has led to the political impasse in Gambia. This goes a long way to show how self centered and power thirsty are leaders in Africa. It is only in Africa you hear leaders accusing their predecessors  of crimes and corruption, as if Africa is a continent, where outgoing leaders are criminals and the incoming leaders are angels.
This does not mean that if anyone has committed a crime, that such a person should not questioned or be prosecuted. But the way it is done in Africa to create political conflict and a state of insecurity without caring that when two elephants (two leaders) fight, it is the grass (the people) that suffers.
The world has witnessed this type of development in Africa leading to complete outbreak of war in many African countries, which eventually have led to the employment of children as soldiers, cutting arms and other evil in the name of fighting senseless political wars that don't benefit the people or anyone for that matter.
People, who have been wondering about the cause of Jammeh sudden turn around against relinquishing power, after his  acceptance of election defeat and congratulatory remark to Barrow, are saying that now knowing the cause of the conflict in Gambia advise Barrow to jettison any truth and reconciliation inquiry and concentrate on establishing programs toward improving the lives pf ordinary Gambians.
They say that it is only in Africa leaders waste their time pursuing their predecessors with the time and energy they devote to governance to make life better for the people. And that in establishing the so called truth and reconciliation commission, most of them undertake steps to consolidate themselves in power and make political opponents become victims.
People are saying that it is a good radiance to bad rubbish that Jammeh has agreed to leave the country and that Gambians should be thankful to those West African leaders who have ensured peaceful resolution of the conflict and that Barrow should stop contemplating anything that will throw Gambia into unwanted crisis, but should instead be thanking God (as he is seeing doing the picture above) that has helped resolved the debacle, which would have prevented from realising his political ambition without shedding of innocent people's blood.
NEWS AND FEATURES
News & Features Around The World