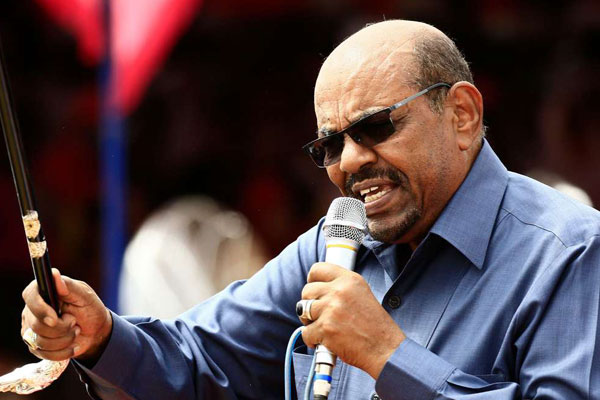 Omar al-Bashir of Sudan
With the declaration of emergency by Omar al-Bashir of Sudan, the world can now see an emergency that is self-serving, against the one in the United States that is not.
​    Al-Bashir's act has created a perfect comparison between his own declaration of emergency and the one by President Donald Trump in the U.S..
Liberals and Democrats have erroneously declared Trump's emergency as obscene, because according to them, Trump's declaration of emergency is meant to get the money for the wall he has promised to build at the border to curtail illegal immigration, drugs, human trafficking and stop the easy passage of criminals into the country.
For weeks that Democrats in the House have debated and have been acquainting Americans of their plans to vote to stop Trump's emergency, there has been no other emergency to show as frivolous for the Liberals and Democrats to know the type of emergencies that can be so described, and for them to know that America has a leader that Americans should be proud for his concern to put an end to the mess at the Southern border.
It is possible that if Americans who have described Trump's emergency as unconstitutional have experienced a military dictatorship or ruler as obtained in countries under pseudo-democratic governance, they would have exercised enormous restraint in describing Trump's emergency as unconstitutional. They would not have been saying there is no emergency when the situation at the Southern border is obvious to all as constituting a moral equivalent of war worse than emergency.
It is well that Al- Bashir has declared his own emergency, while American lawmakers are muting an idea to vote to stop Trump's emergency. And it is timely here to explain events leading to Bashir's emergency in comparison to Trump's emergency, for the U.S law makers to understand that Trump's emergency is not frivolous as many of them in the House want the world to believe.
Trump's emergency is essentially a search for SOLUTION to the protracted problem at the Southern border between the United States and Mexico, while Al-Bashir's emergency is targeted to stopping demonstrations against his leadership. Sudanese people have been demonstrating requesting for an end to Bashir's leadership. Despite efforts to stop the demonstrations, demonstrators have waxed stronger, becoming something of a shock to Al-Bashir, who thinks he is still invincible with his 30 years breathing autocratic rule and that his fortress is still impregnable.
About 50 among Sudanese demonstrators have been killed by security forces, according to reports, defending Al Bashir in his palace! And Al-Bashir has said that the killings have been perpetuated by foreigners, saying the guns used in killing his people have been manufactured abroad and not in Sudan!
In the U.S., residents know that it is common sight to see people in their neighborhoods drooping on sidewalks and dancing on a spot, apparently result of drug overdose. Every family prays and watches over their young ones not to be caught in the drug dragnet. It is no longer news that MS-13 gang - part of illegal immigration from El Salvador - have become a household name in the country. News reports on Friday night reveals that members of the New York Police Department, NYPD, living in Long Island have become targets for assassination.by MS-13 gang members.
All the scenario above aside, the world watches everyday as caravan upon caravan of thousands of asylum seekers leave South America heading to the U.S. amid news that crippling wages of unskilled workers in the country has arisen from the supply of workers that is far higher than the demand. The situation at the border is so serious that no one around the world would claim to be ignorant of the trouble that America faces at the border.
Isn't obvious that Trump is fighting to protect America's and Americans' interests, while Al-Bashir is fighting to protect his own personal interests at the expense of Sudan's and Sudanese interests? Whose interests are the Democratic Party lawmakers in Washington D.C protecting? Their own interests or the interest of unskilled workers who are being ripped off with low wages amid rising cost of living, or the interests of MS-13 gang members and the drug cartels?