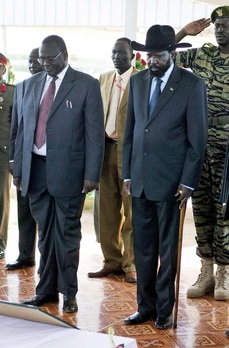 Charma and Kiir (Courtesy:new.yahoo.com)
President Salva Kiir sacked his vice-president, Riek Machar, and the cabinet over an allegation of a coup against his government. This was followed by violence in the country in December's third week, when leaders of the ruling party, Sudan People's Liberation Movement, SLPM, could not achieve peace among themselves.
About 500 people have been reported killed in Juba - the country's capital alone - with a fear of civil war hanging over the country. The skirmishes is reported to have ethnic differences as it's foundation, because the president is from a Dinka ethnic group, while the vice-president is from the Nuer tribe.
On December 16, the New York Times reported President Kiir's disclosure at a press conference that soldiers loyal to the former vice-president attempted a failed coup that had exacerbated the country's political problem and the tension that had been hovering over the country for months prior to the coup information.
Before the coup, the former vice-president had expressed intention to vie against the president for their party's leadership ahead of the national election in 2015, establishing a clash of interest and competition between the two leaders. Ironically, information reveals both have not been on talking term and making people to fear for the country's stability.
Following the announcement of a coup, President Kiir imposed a curfew and said that his forces were on the heel of the coup plotters with a promise to ensure justice.
But a report by Al-Jazeera based on a reliable source said it was a phantom coup and that what Kiir held to as a coup was a usual occurrence in an ethnically divided country. However, the report says that Kiir has become relatively unpopular due to the political and economic direction of the country disapproved by many people who express dislike to Kiir's ethnic hold on government against others.
A joint statement by Church leaders in the country reveals that there is a political problem among leaders of the ruling party, advising that it should not be turned into ethnic problem.
Kiir accuses Machar as the cause of the war and advances as the reason Machar cannot be president. He says he will like to meet Machar but do not know what will be the outcome of such a meeting.
Machar said he barely escaped with his life; his body guards and family were summarily executed and his house burnt. The rebellion against the government in Juba is led by one Peter Gadet and his men are reported as having taken over the barracks in Bor and other major towns.
HTML Comment Box is loading comments...
NEWS AND FEATURES
News & Features Around The World