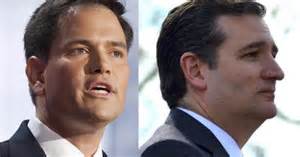 Maro Rubio and Ted Cruz
Senator Ted Cruz does not need an introduction as a presidential candidate and a conservative on the Republican party's platform. The matter in contention about Cruz issues about his campaign for president, the way forward and whether winning the presidency is a do or die affair, now that Cruz has joining his party's bigwigs in their winning an election at all cost.
Cruz had thoughts he was his party's best candidate before he realized that he was not the best candidate based on voters' decisions that had made one of the candidates the front runner ahead of Cruz. When Cruz manifestly occupied the second position, he openly joined with Marco Rubio on the debate podium in attacks against Donald Trump based on the request of his party's bigwigs, who said they did not want Trump to be their flag bearer, because Trump had alienated major voting blocs like the Latino, Muslims and African Americans.
The Republican Party's bigwigs want election victory at all cost and they seem to have Cruz's approval in their bid, just like they have done of Rubio. With Rubio's fall, the party's bigwigs have switched allegiance to Cruz. Just like people generally say about of politicians as lacking integrity, the American public is seeing so much of that among Republican Party presidential candidates, who have bandied with their party's bigwigs in the bid to defeat Hillary Clinton at all cost and any candidate who will stand between them and their bid is termed a conman.
In their bid to want to stop trump, the party's bigwigs and the presidential candidates who have joined them are proving to be more cunning than Trump in their game. The first throw-up by Cruz that shows he has become like Rubio is his statement that the police surveillance be introduced in Muslim neighborhood, following the terror attacks in Belgium.
In efforts to go round the television houses to campaign for Cruz like they have done for Rubio, the party's bigwigs are running into trouble they are causing for working to use individuals against their natural inclinations. These bigwigs want to stop Trump, yet trump has won Arizona, John McCain's state, winning all the delegates. Were the bigwigs and Cruz asleep? And for winning Utah, Cruz went to town, touting that the Republicans and Conservatives have started lining behind him.
Cruz cannot understand that winning votes by arm-twisting a co-contestant like him and the party big-wigs are currently doing does not represent a free and fair election. Currently, Trump and Cruz are running neck to neck in the polls in Wisconsin, the next primary election venue. Nikki Haley endorsed Rubio in South Carolina, but Trump won in that State and Rubio lost it.
First, the bigwigs and their surrogates said Ohio States will be the decider, but Ohio went to John Kasich and Rubio crashed in Florida. So their next hope is Wisconsin. If Trump could win Arizona, despite McCain's being a senator from Arizona, what reason do we have to advance that Trump would not win Wisconsin or any of the other states toward realization of his objective as a candidate as the battles continues?
And if he loses and loses the nomination, is not election suppose to be competitive and no a do or die affair in the world's number one democracy, against what is obtainable in some of the Third World's struggling democracies?