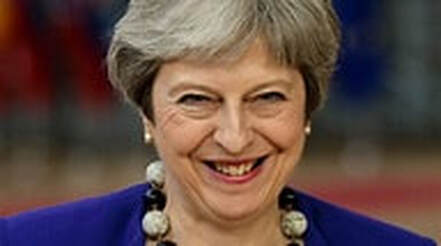 Theresa May
If Theresa May has lost the vote of no confidence on Wednesday, she would have been like the Guyana leader, David Granger, whose loss of vote of no confidence by a single vote has pushed his country for an election earlier than expected.
Some analysts on British politics reported said that if May had lost, Britain would have just few weeks for an election to replace May as the prime minister.
Therefore, May deserves every well-meaning observers's congratulatory remark for her survival. It is not about the margin of votes that she has for survival that matters. But that she survived at all is what matters..
Although, curious observers saw the possibility of her survival before the Wednesday votes, because according to them majority members in May's party remain behind her for her to continue as prime minister, though most of them voted against the Brexit deal. Making the Brexit deal the crunch of the problem that May faces. Leading to a question about the  possibility of correcting anomalies in the deal to avoid the country leaving the European Union without a deal.
News reports say that one major problem with the Brexit deal is about the immigration between Ireland and Britain that Britons want avoidance of physical search them crossing the border. This aside, news reports say further that for Britain to leave the EU without a deal would mean to begin most of the trade contracts with other countries in the EU all over again. It is said that this will negatively affect British businesses and that it will be a thorn in the pockets of business people.
However, it is a good political development that May's party men and women are solidly behind her to continue as a prime minister against the wish of the opposition. She is expected to work with her party to shake up the Brexit deal or to be ready to take Britain out of the EU without a deal and be ready to manage the fallout.
The people voted for the Brexit. for Britain to get out of the EU. It is only the responsibility of the government to manage the country's departure from the EU with little or no damage to British interests. But if the only option open for the country is to leave without a deal, is there anything the government will do to ensure there is no physical checks in the border between Britain and Ireland, since the issue seems to be the most important in the agitation over the deal?
Left to the opposition, May would have been on the preparation to become history as a prime minister. But her party saved her from the embarrassment she would have faced. Reports show that May still has a lot of work to do and she is already in Brussels for a meeting with EU leaders, for further concessions. Though her supporters say she cannot be challenged again for another one year after the Wednesday's victory, the opposition is still asking for her resignation.
The contention between May's party and the opposition is not unexpected. Life is itself about contention.and as humans we struggle to overcome. It is interesting. watching the prime minister's relentless spirit to overcome the obstacles between her and delivering a deal, expected to satisfy her country men and women.