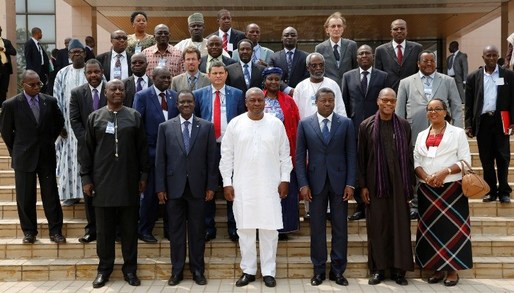 Some of African leaders during one of their continental meetings
When will people in Africa, from country to country, begin to hold their leaders accountable and in fact challenge them for a better life?
This is a question many people are asking as Ghana prepares to vote in another presidential election on December 7.
Many Ghanaians interviewed in New York City by this reporter don't approve their current leader, Dramani Mahama, for another term.
There say that there may be many others who are yearning for Mahama to be returned for another term in office, despite the massive allegations of corruption against his government, but they are nonetheless looking forward for change.
In nearby Nigeria,  Muhammad Buhari, elected nine months ago on a campaign of change,  is fast falling into disfavor, following economic recession,  ushered in by the fall in oil price in the international market turned into unavoidable suffering for citizens. Muhammed's government has been busy unearthing massive corruption among former government officials in the Goodluck Jonathan administration, which he replaced.
Many Nigerians say that Jonathan has become toxic, with the level of corruption in his administration, though he has not personally being investigated and found questionable. But many observers have asked that what usefulness is in a leader who cannot rein in on his stealing ministers? 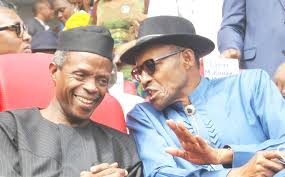 Nigeria's Vice President Osibajo and President Buhari (Courtesy: BellaNiger)
Many Nigerians say that Jonathan has become toxic, with the level of corruption in his administration, though he has not personally been investigated and found questionable. But many observers have asked that what usefulness is in a leader, who cannot rein in on his stealing ministers?
Just as many Ghanaians are questioning the rationale for Mahama's campaign for a second term, they remember President Barack Obama's visit to Ghana at the beginning of President Atta Mill's government, and his hailing of Ghana as a beacon of light to Africa's democracy. Some Ghanaians are saying that light has become darkened and the hope Ghana has smashed by corruption and bad economy.
The change mantra in African politics, with Nigeria and Ghana as two good examples of countries, where two former vice presidents, Jonathan and Mahama, came into office, after the death of incumbent presidents, but failed expectations and a yearning for further change. A change agent in Nigeria is currently facing the worst economic challenge any leader can face. The opposition party in Nigeria that has ushered Muhammad into victory is in disarray over sharing of National Assembly offices, and there is prayer among Nigerians for a governorship election about to hold in one of the states in the Western Region not to lead into bonfire between rivals in the ruling party. And that does not mean they are looking for the return of a leader they have voted. 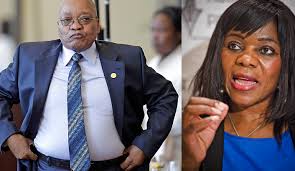 Jacobs Zuma and Thuli Mandosela (Courtesy: DailyMaverick)
​Is this type of change Africans seek from their leaders? A change of more than two steps backward? Are Africans not still in the same situation that early Africans found themselves, when Kings sold innocent people into slavery with force and black people today  in the Diaspora ask, up to this day, why the Kings sold them into slavery and no one can answer the question. Agents of self glorification and personal enrichment, like Kings in Nigeria of yesterday, have begun recommending Nigerians to go back to their vomit, and asking that Jonathan be considered for another election in 2019!  Nigerians may not like their current economic situation, many people are saying that 2019 is still about three years away and that things may turn around for the current government and that if the situation does not turn around, a new leader will be preferred, unless the godfathers want to show their fangs again.
There are very few countries in Africa currently fairing forward looking in Africa, and Nigeria is number one on the list. Others are South Africa, Egypt, Algeria, Angola, Morocco, Libya, Sudan, Ethiopia and Tanzania, according to answersafrica.com. Yet, President Jacobs Zuma of South Africa has been fighting a battle against accusation of corruption not hidden. Egypt killed more than one thousand innocent souls over the struggle to have one man as president against an incumbent's disfavor with godfathers that questions whether Africa's freedom or otherwise. Libya is still in smoke after Muammar Gaddafi's overthrown. Sudan endured a war and the president in the country is still called names for his loss of South Sudan. Angola has fought its own civil war like Nigeria, and the leader there seems to be made to be for life.
Our brethrens abroad said their forefathers were sold into slavery by force and against their will, but today we are not forced into slavery, but willingly carry our bags and walk in search of jobs abroad careless, whether it is slavery or not, because the condition at home is bad, bad and getting worse. Yet, Africans are the loudest inserting themselves into the protests against outcome of an election in the United States, where Americans exercised their voting rights by voting for a man of their choice. 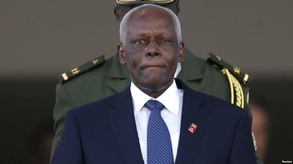 Jose Eduardo Santos of Angola.
Latest    They complained against gay marriage and transgender gains in America, and when the same powers that have empowered gays and the transgenders are swept out of power, Africans cannot see the relevance of what has happened and ask appropriate questions, whether they have won the marriage question, but chose to ally with the powers they have voiced opposition in recent past, choosing to play politics of personality, regardless of issues. Many observers believe that this same attitude is responsible for the politics and the economic situation in the African continent and the reason corrupt leaders there have  free rein to do anything, because Africans hardly protest bad government. And when they do, they wait to reap gains for playing a role and the media will shout through the roof how they helped the incumbent into power.
It is not only sit tight leaders that are tolerated by Africans, ​there are professional lobbyists who benefit from the four years change of government and are ready to seize on any opportunity to sell dead woods to the people as formidable candidates. What matters to these lobbyists is how much they are paid  or they will realize from the fallout, and not what benefits will accrue to the people.Latest information from Zimbabwe shows that Robert Mugabe has announced a decision to retire in 2023 at the age of 99, yet he admits that the country's economy is currently falling apart.
Observers are saying it possible that Ghana will use the forthcoming election to show the world the country remains the beacon of light and hope for democracy in Africa, by voting their conscience based on issues, and that it is time to tell the godfathers that their time is up and it is time for the people's votes to count.
NEWS AND FEATURES
News & Features Around The World