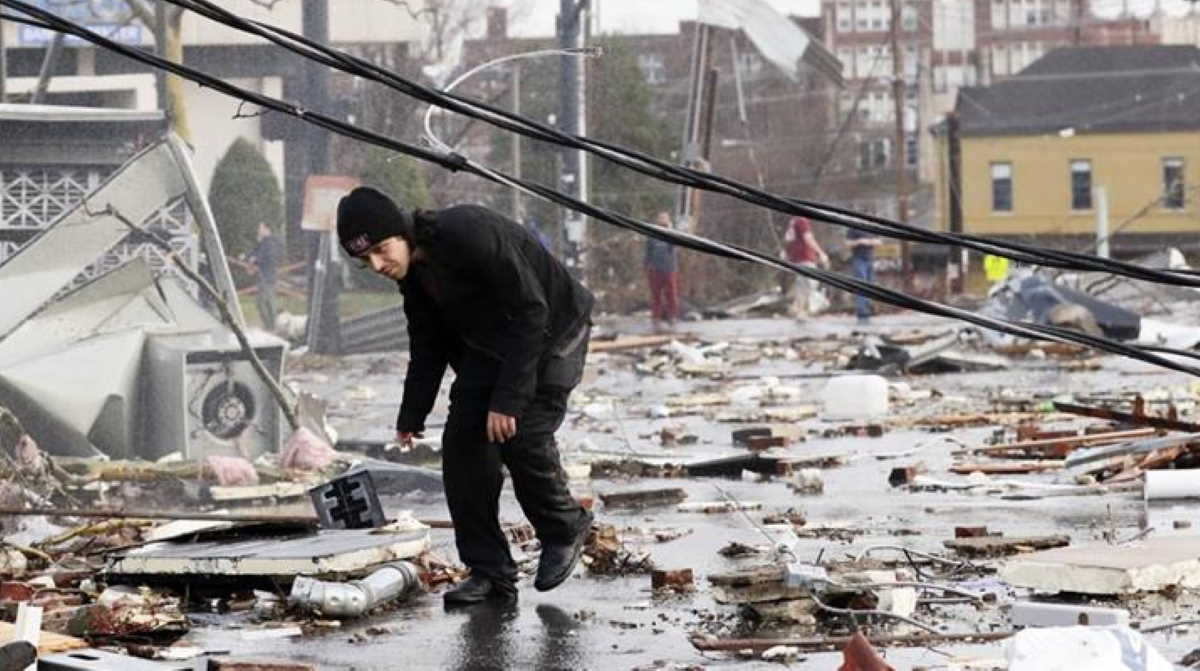 Part of the area affected by tornado devastation in Nashville, Tennessee (Courtesy: www.poandpo.com)
24 people died on Monday in Nashville, Tennessee, from a powerful Tornado devastation. And about a score people are still reported missing. Amid the Democratic Party's primary election on Super Tuesday, there were reports about six deaths.  The number of the dead climbed and nine bodies were reportedly found on Tuesday night into Wednesday morning. Five children were counted to be among the casualties.
Consequently, a state of emergency has been declared in the state.The tornado struck when the residents were asleep. A school attended by about hundreds of children were wiped out and books scattered on the floor. The children in the school were saved because they were in their homes sleeping and not in the school. If the tornado had struck in the day, the loss would have been more grievous.
Photographs from news reports show complete wipe of what had been human habitation, and left behind completely mangled houses and upturned vehicles. Cars buried under fallen trees. Electricity cable dangling in the air   road signs  hanging and holding to nothing amid darkness and loss of electricity. It is like Tornado hate modernism and that its main object is wipe out everything that makes people happy.
This is unfortunately part of human experience in battle for survival against inclement weather. Tornado devastation today, and hurricane devastation tomorrow. It is the part of the imperfection of the world where we live and dying, and dying, irrespective of age, when we don't want to die. We run from death and death still catches up with us.
It happened in Tennessee on Monday. It had happened elsewhere before Tennessee. We don't know where it will happen next. People die everyday of cancer and other terminal diseases like Coronavirus. Yet, humanity is resilient and unstoppable in a world littered by different forms of governance and leaders.
Some of these governments and leaders are humane and some others inhumane. When the inhumane governments leave their people exposed to devastation from lacking, and the people struggle to make ends meet, other damaging problems emerge to threaten the people's lives.
As humane as the government is in the United States, the inclement weather remains part of the problems that humans grapple with here and one that also kill people..
Comment Form is loading comments...
NEWS AND FEATURES
News & Features Around The World