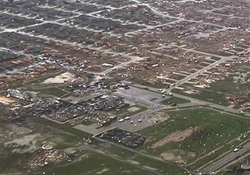 Moore in Picture
About 51 people were reportedly killed by tornado that hit the Moore suburb in Oklahoma yesterday, and about two dozens children still missing in one of the damaged schools.
A heart rending tornado had touched down and devastated the Moore suburb, near Oklahoma City, leaving massive destruction, worse beyond human imagination, on its path. It wiped off more than a mile distance of human dwelling.
Consequently, Okhaloma's  governor, Mary Fallin has declared  a state of emergency in 16 counties.
A female resident told a reporter that she had lost everything. Her statement certainly represents the lot of all those whose homes have been destroyed.
People crawled out of homes and vehicles, where they had taken refuge amid flattened homes.
Parents are anxious their children are safe, and children are anxious that their parents are safe.
Oklahoma, Texas and part of Missouri have been under Tornado watch after an earlier incidence in Oklahoma that claimed two lives.
Meanwhile, authorities had confirmed 24 deaths and said the number may rise. The earlier number of at least 51 was said to have been due to likely double counting.