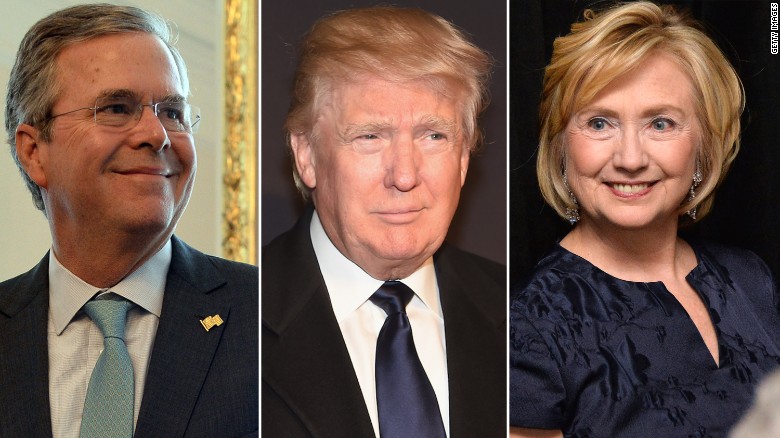 Jeb Bush, Donald Trump and Hillary Clinton (Courtesy:www.cnn.com)
The Republican Party's convention is coming at last with indefatigable Donald Trump as presumptive nominee against the wishes of powerful elements in his party.
People who know say that Trump's fight is not against blood and flesh, but against powers in high places and nondescript ruling houses.
​   They say one ruling house is down, remaining one more ruling house for him to conquer.
They say Trump has not send the ruling house in the Republican Party out of the party's convention in Cleveland. Members of the ruling house have voluntarily said one after another that they would not be at the convention,  because according to them, Trump has not proved beyond reasonable doubt that he is a defender of all races.
But observers know that the members of the ruling house are merely using the defense of Islam and the issue of love for all races and the American value as smokescreen to react to the defeat of one of them in the primaries beyond their expectations. Jeb Bush wants to be president like his brother, George, but he has forgotten that recent history is still fresh that Americans have not forgotten and that with that history, it will take many years for another Bush to be able to convince Americans to get their votes.
But Jeb thinks that Trump is his nemesis, who has prevented him from aspiring beyond the failure in the party's primaries. Observers believe that with the Bushes sitting by the sideline, the Republican Party is silently being rebranded as a party of the people for the people and not one for any particular ruling house.
Daddy has been a president, a brother has been a president and another brother wants to be a president, without factoring history into his need to run for president. The failure of the ruling house automatically factors into the failing of traditional politicians and Trump's emergence.
Curious observers say that if voters have not decided to do away with traditional politicians, John Kasich of Ohio would have been the favorite for voters and not Trump. They said Kasich demonstrated his closeness to Ronald Reagan and understanding of the working of Washington. But voters were done with all those niceties. They believe something serious was wrong with the Reagan's party and a need for renewal.
The reason for the shocking capture of the party's nomination by Trump. Though, the battle is definitely not over for him yet. He still has the convention to confront and he is uncertain of what his many political enemies in high places will do, in spite of their vow to be absent from the convention. Many observers believe that he has captured the nomination and that all the talks about challenging his nomination by his enemies is a fluke.
If Trump does emerge victorious from Cleveland as he has done against other 16 contestants that he has defeated to be heading to Cleveland for a bigger show, he still has another ruling house waiting to be humbled outside the Republican Party. The first time this reporter knew about the ruling house was when a professor in his political science class in college introduced him to what he called  the formidability of "The Clinton Political machine."
But of recent things have not been well with the powerful machine. The media says that Madam Hillary Clinton has not holding press conferences as should be expected of a presidential candidate, a way of saying that she is avoiding media scrutiny. Even the liberal media is painting the Clintons as the Daisy and Buchanan of this time.
Whoever may have read the role of Daisy Buchanan and Jay gatsby in F. Scott Fitzgerald's 'The Great Gatsby" would understand that the compliment is not appropriate for anyone who wants to be president. Virtually everyone, except Democratic Party card carrying members are tired of the lines of development in the Clinton Political Machine in the last few weeks. Many observers now believe that the Clinton Political Machine is vulnerable to defeat by Trump.
They said that the Clinton Political machine was not into the type jeopardy it had sunk in the last few weeks, when it was humbled by Barack Obama, who defeated Clinton and became his party's nominee and later the president. Many people are saying that all that Trump need to do is repair his relationship with the Moslem world and the red carpet to the White House will grace his way from the Trump Tower in New York to Washington.
NEWS AND FEATURES
News & Features Around The World