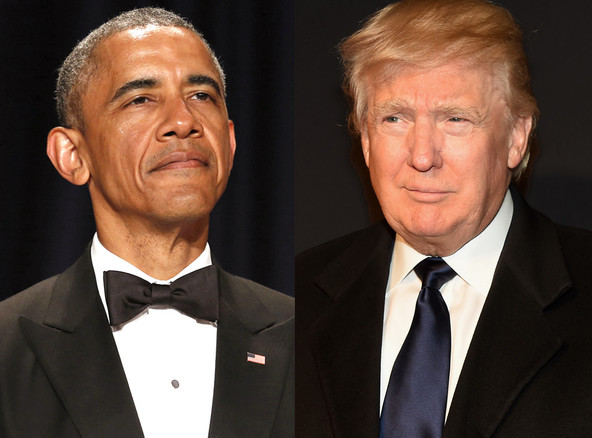 President Barack Obama and President Elect Donald Trump
Trump tells his supporters in Cincinnati on Thursday night that change has arrived, and says that though it might be tough to execute. Nonetheless, he says that he will fulfil his promises for change.
Trump is not the first to talk about bringing change here.  President Barack Obama said the same in 2008.
Observers say that both men have only followed what has become a mantra for politicians seeking voters' support.
Politics of change was first introduced by the Missionaries, who went from the civilized world to other parts of the world , on conquest and civilizing mission.
The Missionaries, both Christians and Moslems, implored their first contatcs in places like Africa, to embrace a new religion and culture and abandon their own culture.
​   The Missionaries were clear in their message that the culture they brought was humane and the old culture they told their contact to abandon was inhuman. In some cases, the Missionaries were right and correct in some instances and were also wrong in some others.  .
The Missionaries' new contacts found it a bit strange to change and abandon their old culture to embrace a new one and some people protested violently against such change. The home government of the missionaries backed the Missionaries up with gun power to force their new contacts to change, by force by fire.
The history of the Benin people in Nigeria was very clear about how the warlords from Britain forced the people to embrace change after the people too had killed many of  the apostles of change in anger. And in Chinua Achebe's 'Things Fall Apart', the world has learnt about events in Ibo land of Nigeria, where one man hanged himself to avoid the disgrace from embracing change that was denigrating to his people's culture.
The issue here is how does one person or just a group of people decide change in the life of people they seek to manage? In the days of yore, the Missioanries used social issues as the platform upon which they based their reasons for seeking change in the lives of their contacts.While today both social and economoc problems have become the major reasons that politicians use to seek change and warm themselves into the mind of people.
Just like the Missioanries warmed themselves into the hearts od the people by providing training and employment, and helping their new contacts to live a better life, the same thing that politicians still seek to do today. Some politicians have failed for inability to fulfil their promises of change. And the people no longer trust the politicians for this reason. Therefore, when voters no longer trust one party that has disappointed them, they vote for another party for change.
The onus is therfore on the politicians to fulfil promises of change made to remain relevant  to the people. It is the challenge that Trump faces in America today. But to many of his hard opponents, some of the promises Trump made, like building a wall, deporting millions of people, are impracticable. But still, a large number of voters have approved him to bring about the same changes that his political opponents say are impracticable. He has reportedly been meeting with some of his diehard opponents like Mitt Romney for consideration for political appointment.
​      Unlike the days of the Missioanries and their home governments, no politicain can force change on the people in modern times, but there is a sense that doing excatly what has been promised, no matter how how difficult and no matter the opposition against the change from political opponents, is enchanting. But for anyone who wants to effect change, there is also need for prayers in decision making, as the experience of missionaries who got killed in the bid to force change has shown.
But would diehard political opponents who had acted like bombs against the emergence of a presidential candidate help the president elect in ensuring his change mission is achieved, if such opponent are given political appointments? Well, pundits say the president too has to play save by reaching out to both political friends and enemies. In this, Trump seems to be getting smarter than peo[ple who say he is not a politician, but a business man. Trump is acting well to the same that when you are in Rome, do like the Romans.
Therefore, the Trump may have been a business man before stepping out to contest for office. He is surely learning the ropes and no can say that this guy is not a politician with the ways he embracing everyone for the good of all. But people are saying that he must remember his promises and the need to fulfil them.
NEWS AND FEATURES
News & Features Around The World