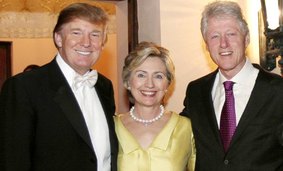 Trump and the Clintons
Donald Trump won the entire primary elections in Pennsylvania, Connecticut, Delaware and Rhodes Island on Tuesday, while Clinton won in Pennsylvania, Delaware and Maryland. Bernie Sanders won in Rhodes Island. Ted Cruz and John Kasich did not win any state at all.
With victories from five states, news reports headlines say "Trump sweeps" and trump exceeds expectations", while Clinton is reported to have won three states but failed to sweep because Bernie Sanders won one state.
The New York Times' report says that with Trump's victories in five states on Tuesday, the possibility of a contested Republican nomination decreases. It means that despite the odds against him from the Republican party bigwigs, Trump is not looking back. He is pushing forward toward the nomination.
Meanwhile, Cruz is reported to be campaigning in Indiana, while he made caricature that the media would say Trump may be clinching the nomination, because of his Tuesday's sweeping victory. Obviously, observers are quick to ask how Cruz or Kasich hope to become nominees with their appalling performance or their rejection at the polls.
NEWS AND FEATURES
News & Features Around The World