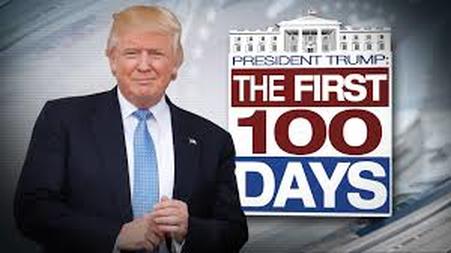 It is President Donald Trump's 100 day's as president, the world  intact, not going under and no economic meltdown, as predicted by pessimists, but actions.
Yes, pessimists said that there will be anarchy and economic meltdown with Trump as president. But the world has witnessed Trump working as president for 100 days, without a sign of anarchy or economic meltdown.
Instead of anarchy and meltdown, the world has witnessed President Trump working with zeal and strength, unexpected of a man of his age, toward fulfilling his promises to the electorate.
He promised he would ban certain categories of travelers coming to the United States. And he immediately went to work to get the act in place. The action shook the U.S. and the world. It is an in courage and enactment of a change. The world has hardly witnessed a president working to fulfill a promise with such a zeal. Though, his political opponents said the travel ban was targeted toward Muslim countries. He argued that the travel ban was to protect the homeland and keep Americans safe at home.
The opponents went to court and won against him. He was not out. He amended the travel ban and they went to count again and won against him. He insisted that the ban was not targeted toward any religion.
Though he expressed distaste that his opponents were using the courts to arm twist him and stop him from doing what he said he would during the campaigns and it looks like he does not agree with the separation of power between the executive and the judiciary and that legal battles are parts of democracy.
Working with his party that controls the congress, he attempted scrapping Obamacare based on his promise during the campaign, he flopped, because a section of his party disagreed with some provisions in the new health bill. The nation witnessed another time of democracy at work, with republicans disagreeing among themselves over the health.They refused to vote for the bill, and not voting careless that  it had the rubber stamp of their party.
But the president's office relentless is obvious. The president has not stopped working toward fulfilling his promises. Now, it has been announced that members of his party, who disagreed with the health bill at the first introduction have worked with the other member on necessary amendments and that the bill may move forward anytime from now. Just like that was not enough to show how daring trump is at fulfilling his promises, the office has rolled out tax cuts for individual Americans and corporations, toward fulfilment of another promise for economic growth and jobs.
The president has shown that his agendas are to fulfill his campaign promises. Although, there has been some changes in his decisions that appear like acts of diplomacy and soft pedalling on hard approaches, that in itself cannot be said to be sign of weaknesses, but part of human nature. A good example was China he called currency manipulator, but reversed it. Later he is seen praising china as reliable on diplomacy over belligerent North Korea.
Here, it could be seen that a president that pessimists had said was capable of anarchy if elected had been working with china to handle north Korea, instead of war. He said that he would work with the allies and China, to prevent North Korea from endangering the world. But added that if working together does not stop not North Korea, America will go it alone as a last resort.
Although, a section of the media are talking about lack of legislative accomplishments, but with the foundation that Trump has laid for his administration in the first 100 days, it would not be difficult for him to amass legislative accomplishments in the coming days.
NEWS AND FEATURES
News & Features Around The World