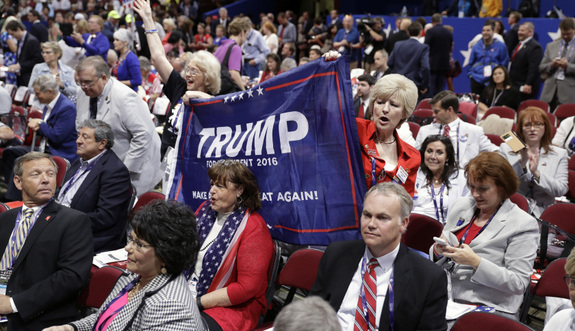 A photo from the convention (Courtesy: Fortune)
The Republican Party's Convention is in its second day and it is the talk of the town, no matter the nature of the discussion.
The hottest in the plate is the Melania Trump's speech and the controversy about the comparison of parts of her speech to the speech made by Mrs. Michelle Obama in 2008.
A section of the media is raking up allegations of plagiarism, but Mrs. Trump has said that she has a fragment of the same thought as contained in the speech she is said to have imitated, and that she has not copied anyone verbatim.
But trust the left wing media capitalizing on any negative development to cloud positive development about Trump.
Aside from the Melania speech fallout, there are reports about anti-Trump delegates plan to crash the delegates's roll call, but this is yet to manifest. Although, there have been reports of protests on the convention floor. All these are not unexpected, given the controversy that has trailed the party's primary election.
The only miracle up to this moment is that the leading contestant in the primary is still standing on his feet and that there is a convention against expectations of riots. Trump is not only standing, he has got one point bump in the polls from the first day of the convention.
According to the RealClearPolitics, the LA Times/USC poll has Trump ahead of Hillary Clinton with one point.The NBC News/Survey Monkey has Clinton one point ahead of Trump without Johnson and Stein; but with Johnson and Stein, Trump is one point ahead of Clinton.On Monday, July 18, Clinton led Trump in four different polls with four, two three and five points. By Tuesday, Clinton's lead in the polls has been wiped out. It means that Trump may have gained close to four points bump in the polls from just one day of his party's convention.
Observers believe that the biggest news that is likely to create a bigger bump in the polls for Trump will happen, when he is eventually crowned the party's nominee. Of course, many people are on the look out for riots in the case that the anti-Trump protesters or delegates try to rob the owner of his crown.
Therefore, the question on observers' lips is whether in spite of all the threats of anti-Trump protesters, Trump will be crowned his party's nominee or the nation will have to contend with a bigger news about him being deprived what the election says rightly belongs to him, because he has been chosen by the party's voters.
The consensus among observers is that Trump has worked very hard against mammoth opposition to arrive at his biggest moment in Cleveland and that all that the party members are expected to do is support the party's election winner, no matter their grievances. And Paul Ryan made this clear in his speech, using issues in Football games to drive home his point that it is time for the party to unite behind the primary election winner.
NEWS AND FEATURES
News & Features Around The World