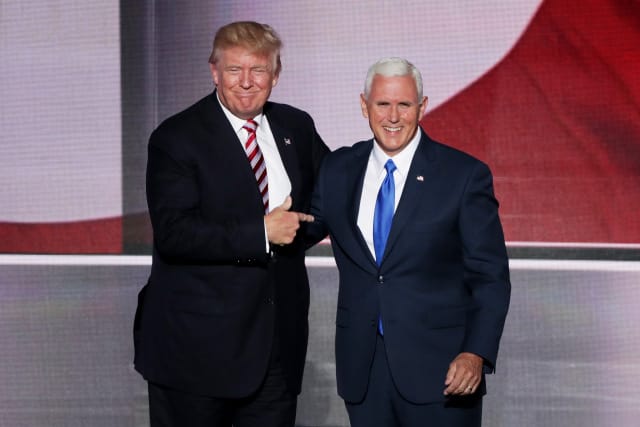 Donald Trump and Mike Pence, the tow men on his shoulders the burden of managing the country is set to be from January 20, 2017 ( Courtesy: Political Insider Blog-AJC.com)
Finally, Donald Trump made it into the White House. Unstoppable from the blow of the whistle for primaries and until yesterday, when he sailed through the Electoral College votes, and his victory in the elections confirmed.
People know that other than waiting for inauguration, no more hurdles for him to jump to be the next president.
How did he managed to to sail through all the fierce opposition, like a soldier maneuvering through enemies bullets in a war, from the primaries stage to the confirmation of his victory?
There was the day he was whisked away from the podium by the secret service amid security scare, and how he returned to the same podium within few minutes. And consequently, people said he was fearless and that he was ready for anything!
Trump is the only person, who can actually explain what his experiences were in his journeys  through various cities in the battleground states, where he and his supporters met with such stiff opposition, from members of their own party and the liberals, who did everything to stop him, but nonetheless found himself continuosly on his feet with Mike Pence, the vice presidential candidate, whose selection itself denotes masterly political pedigree..
But as an observer, there is one factor, the New York Spirit, which many people attribute to Trump's strength, tenacity  and perseverance at 70, which were pivotal throughout the campaign period. What is the New York Spirit? Many people say that it is the spirit that does not sleep or give up, and that it is why people talk about New York as the city that never sleeps. It is why it is often said by New Yorkers that whoever one can make it in the city can succeed in any human endeavor anywhere. It does not mean that there are not New Yorkers, who may have fallen by the way side in other climes, after living here and leaving to live in other climes. It also not always that one comes across individuals, who demonstrate the attribute that shows their victory based on being New Yorkers. But people know that New Yorkers are hardworking, resilient and always reinventing themselves, for them to be above the burdens of high rent or mortgage and ever rising bills.
It was co-incidental that the last two presidential candidates, who stood shoulder to shoulder in the elections, were both New Yorkers. Donald John Trump is a New Yorker and Hillary Rodham Clinton is also a New Yorker. Trump defeated 17 other contestants in his party and became his aprty's nominee. Clinton defeated two candidates and Bernie Sanders of Vermont the most conspicuous and toughest she conquered. During one of the presidential election debates, a question was asked of the two contestants about what good thing each can say of the other.
Clinton mentions her respect for Trump's children, while Trump says that one good attribute about Clinton is that of a fighter who never gives up. Practically, Trump has not said the same about himself as a fighter and one that never gives up, but he is a living example of a man who fights and never gives against all odds.
Trump's adversaries say Trump is not brilliant, but he has proved his them wrong in every way. Not only with his level of education and schools he attended, but with practical demonstration of knowledge and application.The most pronounced president elect on the social media. There was not a single fierce opponent that Trump failed to give a title that matched throughout the campaign period, from Ted Cruz to Marco Rubio, to Jeb Bush and Clinton. And when there is any expose against him capable of ending his aspiration, he never failed in making stout defence of his position against leaving them in public space undefended.
He routed his opponents from state to state in the primaries, at every stage that his opponents thought they had got him to end his aspiration. By his invention of the campaign slogan, "Making America Great Again," he seems  proved a mastery of Public Relations and that he had  studied the political and economic situation in the country, and he was able to drum up a campaign slogan that matched the country's mood.
Based on his demonstration of strength and tenacity during the campaign, nothwithstanding the human factor that he also has his minuses and a reminder of Christ's statement to his disciples not to call him good becuase no man is goo but only hius father in heaven, many obervers are saying that if trump goes into office after the inauguration with the same zeal that Americans have witnessed of him, this great country will be the beneficiary.
People say that Trump also has to prove his adversaries wrong that voters who give him their votes, especially in the Rust Belt States, for him to emerge the nation's 45th president,  are not wrong about their optimism of  him as  a leader, who will lead the country into greatness. Just Clinton said, "America is already great." But many people also think that the country can still be greater than it is currently.
NEWS AND FEATURES
News & Features Around The World