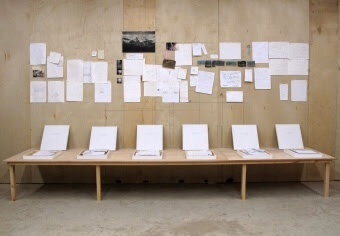 Kinmont's art
An exhibition of new sculptures, "Trying to Return Home Educated," by Robert Kinmont opened on Saturday 12 April 2014 at Alexander and Bonin, 132 10th Avenue, New York. The works comprise wood, copper, earth and hand written notes.
The artist is primarily devoted to his environment - the Californian landscape and working with simple, mostly natural materials, in relation to his body and life. From the title of works on exhibition, one can get a glimpse of a person who may have left home on a journey in search of the Golden Fleece and working toward returning home with a sound education.
Has this any connection with immigrants life in the diaspora? Since it is about life, it seems veritably right to expect a connection with the struggle for a life education. It could be why the artist stopped working creating arts in the early 1970s and embarked on a rural life's experience, where he raised his children and started a school named Coyote. He was reported to have taught his students human creativity; cooked breakfast for them over a camp stove on the floor of the art school.
In one piece of art works - Listen - a 2013 creation, Kinmont produced more than 100 sketches, photographs and notes, where he recorded his thoughts and personal anecdote of five years. These are displayed against a plywood background and stored in boxes. Another two works- 'Waiting' and  'A Broken Letter,' are separated in compartments into four categories of a wooden box.
Copper Pots - an early sculpture, is a group of vessels he planted in the desert and filled with water with the Hope of them germinating dormant seeds and making their path with the least possible scarring of the landscape. The works mark Kinmont's return to the use of copper and provide him with both malleable and hand edged-forms.
Five Dirt Roads - a 2014 creation is in the form of five compartment trays, each filled with different textured dirt. Kinmont returned home with education as alumni of San Francisco Fine Arts Institute and the University of California.his works have been exhibited in in Mexico, Californian and New York.
NEWS AND FEATURES
News & Features Around The World