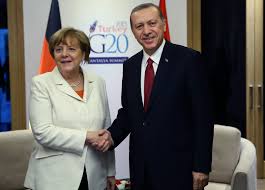 Merkel of Germany and Erdogan of Turkey
Turkey is closer to realizing its European Union membership than ever. This follows an agreement between the EU and Turkey for the return of refugees from Syria and Iraq to Turkey. Part of the EU bargain with Turkey is that Turkey's application to join the EU will be given quick attention.
The new regulations to return refugees to Turkey took effect on Sunday. Consequently, all refugees who arrived at the weekend, and unaware of the new regulation before hopping into boats to Greece, are being processed to be returned to Turkey, according to news reports.
The latest EU decision to return refugees from war torn countries to Turkey is reportedly hinged on the fear of violence, political, economic situation in the EU countries and effort to stop smuggling of refugees from war torn areas to Europe.
The Daily Beast reported that the Estonian President Tooma Ilves said that the fear in EU capitals is not the refugees, but the effect of refugees, and that United States and EU officials have reportedly said that the ISIS has been using the refugees movement to send hardened individuals into EU capitals to execute violence, and that the economic drain on economically strapped EU countries discourage further admission of refugees.
For example, the EU leaders are reported to have calculated the economic and social effect of unrestricted entry of refugees as election tools for the opposition against incumbent leaders, citing the massive victory of anti immigration parties in Germany in local elections as a time bomb for incumbent leaders.
Therefore, every illegal immigrant who arrives in Greece will be registered, but will be sent back to Turkey, no matter whether the migrant is a Syrian or Iraque, Volkan Bozkir, Turkey's minister for the EU affairs was reported to have said.
In the bargain and for agreeing with the EU countries to take the refugees that EU countries will rerun from Europe to Turkey, Turkey will gain $6 million in aid package from the EU and has the processing of her application for the EU membership expedited.
Aside from Turkey's victory for the fast tracking of her application for the membership of the EU, there are other arrangement in the new regulation that say a future consideration for the return of the refugees will be considered and that for any refugee to be allowed to sail to Europe, such a refugee must have been in Turkey for one year.
Turkey seems to be the one country that has gained than any other country from the new EU regulations for refusal and readmission of refugees, giving the fact that the country's hope of becoming a member of the EU countries has become brighter than before, and Turkey may soon realize her EU membership goal, if the EU does not diplomatically play Turkey out of the current arrangement.
Many people believe that refugees dream of coming to Europe may have died with the current cat and mouse battle between terrorists and the law enforcement in the continent.
NEWS AND FEATURES
News & Features Around The World