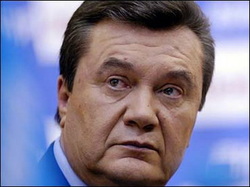 Yanukovych
The United States, Europe and Russia are sparring over which country will be Ukraine's friend, amid protest in the country for a democratic government.
Russia wants to be the country that has Ukraine's attention; Europe thinks Ukraine should be in the EU and the United States is reported as making diplomatic effort to ensure a man believed to be a believer in democracy comes to power. The US favor of a man Europe does not support emanates in a speech by assistant Secretary of State,Victoria Nuland, to the US ambassador to Ukraine and for which she had apologized, according to reports.
However, Ukraine's embattled leader, Viktor Yanukovych, has traveled to Sochi for a meeting with the Russian leader, Vladimir Putin, amid reports of continued unrest and protesters' refusal to leave Ukraine streets.
NEWS AND FEATURES
News & Features Around The World