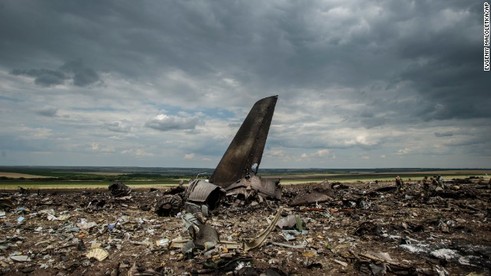 Remains of the cargo plane
A cargo plane belonging to Ukrainian military has crashed and believed to have been shot down in Luhansk by enemy's fire power. There are no casualties. The claim that enemy combatants may have shot down the cargo plane from inside Russia is still unconfirmed.
It is the third time Ukrainian military has been shot down by separatists in Eastern Ukraine agitating for a separate state or be allowed to join Russia. The first aircraft military shot down was in Luhansk and it claimed 49 lives, while the second - a military helicopter was also in Luhansk and it claimed 9 lives. The latest cargo plane's crash is also in Luhansk.
Additional reports show that Russian soldiers have begun massing around Ukraine's border, probably result of limited Ukraine military gains against the separatist in the last two or three weeks.
The argument that the cargo plane may have been shot down from inside Russia as an act of aggression against Ukraine that requires Ukraine's adequate response or that of the allied forces is seen by observers as a step toward destabilization without justification, when it is yet to be confirmed that the cargo plane has actually been downed from inside Russia.
Comment Form is loading comments...
NEWS AND FEATURES
News & Features Around The World