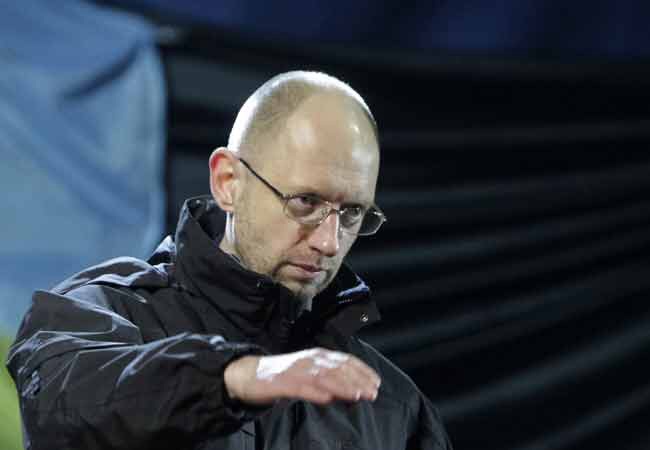 Ukraine's new PM Arseniy Yatsenyuk
Fugitive president, Viktor Yanukovych, says he remains Ukraine's president and appeals to Russia for protection.
Ukraine MPs' nominated interim leaders say Yanukovych has lost touch with reality.
The exchange of words arises amid a counter protest in Crimea against the development in Kiev. Unidentified masked men are reported to have stormed and disrupted Crimea's parliament shouting, "Russia, Russia."
BBC reports that the West has called on Russia to ease tension in Crimea, and Russia has told the West to avoid taking decisions on behalf of Ukrainians.
Russia has not recognized Ukraine's new leaders in Kiev. Russian officials continue to view new leaders in Ukraine as impostors. Yanukoyvch's whereabouts still unknown. Some reports speculate that he has entered Russia.
New leaders in Ukraine have appealed for restraint. They have told Russia that the country's fleet in Crimea will remain there. There is renewed fear of a civil war.
Reports say that Russian leader Vladimir Putin has not said anything about developments in Ukraine. Observers say that Putin has won one victory against terror threat in just concluded Sochi Olympics and that he may be calculating about what he will do with the trouble in Ukraine, where the people have spoken and events have shown a huge diplomatic loss to Russia.
Observers think that events in Ukraine depends on how fast the new leaders are able to set the ball rolling at putting the country's back to work. They say it is why the Parliament in Kiev has quickly nominated interim leaders and a new prime minister on Thursday. It is believed that if the countries that have promised Ukraine financial aid are forthcoming as soon as the country begins talk with them, Ukraine will have only the fear of cvil war to confront from a fugitive president and his supporters.
NEWS AND FEATURES
News & Features Around The World