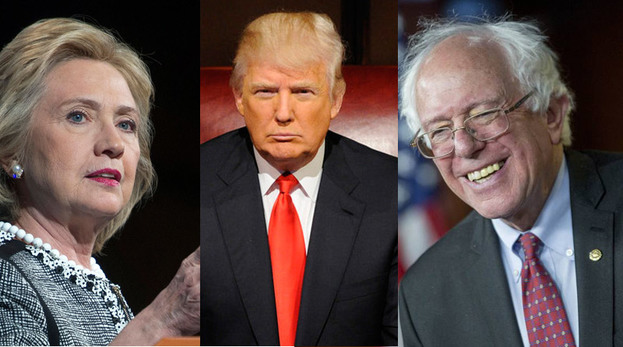 Clinton, Trump and Sanders
Who will emerge the winner in the United States' Republican and the Democratic Parties election primaries first ballots in Iowa on Monday?
This is a question that observers find difficult to answer, as uncertainty rules in all the camps of all the candidates, with news reports about the polls that have tightened up and efforts by candidates to rally up support in the last minutes to the votes
Yes, everyone wants their own candidate to be the winner. People know who are the first runners in the polls, but people are uncertain whether the polls will hold and the front runners will emerge winners or whtehr there would be surprises. Naturally, front runners favored by the polls would want the polls to hold and for the results to vindicate them, but those who have been down in the polls would expect miracles and surprises.
But would there be a miracle and surprises? No one can be certain of an answer. Some observers say that running for a political office such as the presidency in the U.S is a tough job and those in the race, whether front runners or back runners should be praised for their gallantry to want to serve their country and humanity. People say that mistake would be made in words and speeches but that what matters is their conviction of coming forward and proffering solutions to the myriad problems confronting their country, the society and humanity.
After weeks of campaigning and presenting their suggestions to the electorate on immigration, war against terrorism, the economy, healthcare, foreign policy and myriad of domestic issues, it is the turn of the voters from today to show what recommendation or suggestions made by each of these candidates that would be approved by them and the approval will come in term of who they give their votes. Some of the candidates will have cause to radiate joy in victory in Iowa, while moving to the next battleground state,and others will have to continue to fighting to win in some other battleground no matter the outcome of their participation in Iowa.
In 2008, Barack Obama won in Iowa, meaning that he defeated Hillary Clinton there, but Clinton went ahead and she defeated Obama in New Hampshire. The ding dong continued until Obama emerged his party's nominee and eventually the nation's president and the world witnessed a victorious outcome and celebrations. Celebrations that are reminiscent of celebrations on a field of play, when one team's member scores a goal or a team becomes the winner.
There are 12 candidates vying to be president on the Republican party platform, and four candidates vying for the same position on the Democratic party's platform. The polls favor Donald Trump in the Republican party and he is adjudged a front runner. If there would be any surprises, observers think it will be from Ted Cruz who is next to Trump in the polls. However, in the Democratic Party,  observers say that the battle between Clinton and Sanders seems too difficult to predict. Although some people think Clinton will have the edge.
In a short while, we will all know what has transpired in Iowa, when the results begin to tumble in. Yes, let's wait for the results before we begin to click glasses or pump the champagne.
NEWS AND FEATURES
News & Features Around The World