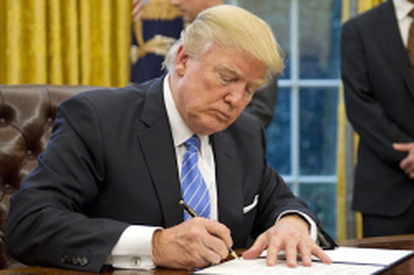 ​   Would the government shut down in the United States or not? The question would be answered before the end of Saturday, as Americans await the outcome of votes in the senate for a new spending bill that include the $5 billion for the wall at southern border. The bill was passed by the House late on Thursday. But observers are uncertain of its fate in the senate.
It will be Eureka, if the bill passes the senate. many people are saying. But if the bill fails to pass the senate vote, it means that government shut down could happen as early as Saturday. Most observers are not optimistic of the bill passing through the senate, because the Republican Party does not have the sixty votes required for the bill to pass. And no vote is expected from the Democratic Party senators, because they are vehemently against building a wall.
Many people believe this is a crisis that must be resolved devoid of political brickbats. Both parties are saying they believe there is a need for border security, but the problem is that each party talks about the formula each want to use to address the insecurity.
President Donald Trump promised during the campaign to build a wall, while his counterparts in the Republican Party disagreed with him during their televised debates. But he insisted that building a wall was necessary to control illegal immigration into the country. He defeated his opponents in the party and he emerged the party's flag bearer. He campaigned hard against Hillary Clinton's open border campaign, by maintaining his stance on building a wall on the southern border, to check the influx of dangerous immigrants and drugs into the country.
He defeated Clinton. Meaning that the open border was not appealing to voters against the wall. No one knew that there could be the type of crisis that the United States is confronting today at he border with a caravan of asylum seekers seeking to enter the country and the government struggling to stop them amid fierce opposition from the opposition party.
And news reports say that this type of crisis has just begun. The Los Angeles Times reported on Thursday that one chief immigration officer in Mexico said that Mexico was not prepared for the type of agreement it signed with the U.S.. to hold asylum seekers in Mexico until their cases have been heard in the U.S. According to the report, more caravan asylum seekers are said to be expected. If that is the case, it goes without saying that if the authorities in the U.S. don't agree on the best way to handle the cases of caravan asylum seekers now, the country's leaders may end up with a major immigration crisis in their hands.
The current development buoys President Trump's long time call for the building of a wall against ordinary control of immigration that is not capable to handle the type of caravan asylum seekers. Whatever the cause of the caravan asylum seekers is in Trump's favor to achieve his dream wall, unless it can be proved he has organised the asylum seekers' arrival in thousands at the border to favor him.
No one would say that the current development does not buttress his call for a more stringent security control at the borders. Allowing the political contention over the winning and losing of election to becloud a sense of reason would not help Trump opponents. Trump's push for a government shut down  is a test of the sense of patriotism of his opponents and critics. The president knows that the ball is in his court with the trove of caravan asylum seekers arriving at the borders. His expression of readiness to shut down the government is a way of inviting the Democrats into a serious discussion over border security. Americans are watching. And they know who is playing politics in this matter.
People are saying that there should be no room for permanent friend or enemy in politics, but permanent interests. People are saying when permanent friendship or enmity is allowed, the people are the losers. They are saying that opposing Trump on every issue on the the basis of the enmity over the result of last election is not statesmanship.
Quiet observers are saying that anyone can call Trump what they like, but that there is justification in his call for a wall to stem the tide of insecurity at the country's border in view of the current development. And that unless the country is ready to embrace open borders as canvassed by Clinton during the elections.
If the bill expected to go through the senate fails to end the disagreement between the White House and the Democrats, since eight  voted against the bill in the House and the bill still passed without a single Democrat's vote, it is believed that Democrats would repeat the opposition in the senate. If that happens, it will be welcome to shut them and the blame game for the shutdown will begin.