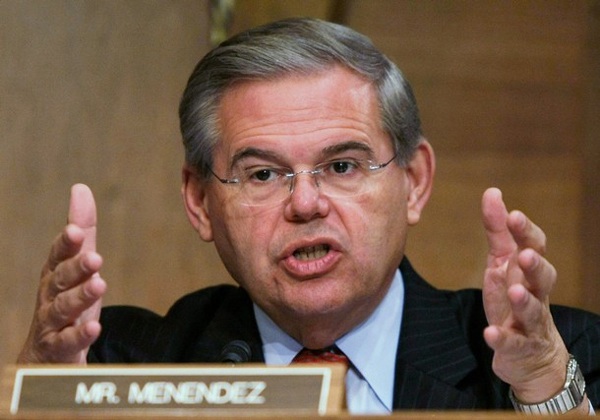 Senator Bob Menendez of the Democratic Party (New Jersey), was on the television on Thursday, defending himself against accusation and charges of corruption. As he spoke, a guy in a pizza restaurant somewhere in New Jersey where this reporter watched the scene asked whether the senator was a mayor.
"He is not a mayor but a senator of the United States, " another guy, a customer corrected the pizza guy who agreed to his mistake and said he was not aware Menedez was not a mayor.
I had stopped over at the restaurant for a quick bite, while I awaited the arrival of a bus. I had expected the bus was arriving between ten and fifteen minutes. But when information from Jersey transit telephone check revealed the bus would not be there until about one hour, I decided on a quick action to fill the stomach, unaware of Menendez defensive show.
If I had not stopped over at the pizza store, I would not have known there was a show going on between the Justice a Department and the senator and that explains the importance of the news media and the television show. The Justice department had accused the senator of corruption and dragged him to court and the senator had orchestrated  a show with his wife on his side. There was no smile on her face. It was a serious matter an she expressed the seriousness with a desirable expression of melancholy. What is at stake us a husband's years of public service.
Someone said he was unaware the senator was accused of anything by the Justice a Department and that if the senator had not come on television, he would not have been aware of it. He had said his mind because someone asked a question about what the senator was disputing, most of us having missed the part of the senator's explanation of the cause of the rift between him and the Justice a department.  Virtually everyone in the pizza store expressed ignorance of the case.
This reporter too did not read anything in the news before he came out that afternoon. In the morning he had read all the news around the world but he did not know about the Justice a Department and the Menendez show until he arrived at the pizza store and saw the senator on the screen. And that prompted him to go and read the news the moment he jumped on the bus.
Indicted for conspiracy and several counts of bribery arising from campaign contributions for his reelection, Menendez has stepped down from his official position in the senate pending the outcome of the case against him, even though no stipulation demands he should step down.
NEWS AND FEATURES
News & Features Around The World